We Spread by Iain Reid: A review 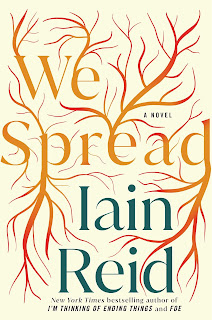 I have not read any of Iain Reid's previous books, but based on my enjoyment of this, his latest, one, I think I will certainly be seeking him out in the future.
My first quandary in attempting to describe the book is to decide just which category I should assign it to. It is literary fiction, certainly, but also it is a thriller, a mystery, with even a bit of horror thrown in for good measure. Reid has the perfect subject on which to expound on all those themes - old age.
His protagonist is named Penny and when we meet her, she has already had a very long life. She is at a crisis point in her life. Sometime earlier, her life partner had died but before he died, he had made arrangements for Penny to have a residence at a unique long-term care facility. Now, after a series of concerning "incidents," she has decided to take up that residence.
The house in which the facility is located is surrounded by beautiful woods. It is quite a peaceful site and at first, Penny is very content there. In her earlier life, she had been a painter and now she begins to paint again. She settles in, enjoying the companionship of her peers who are the other residents, and relishing the experience of being cared for.
As time passes, however, Penny begins to have a sense of unrest about her new surroundings. She begins to distrust her caregivers and to become disoriented concerning the passage of time and regarding her own place in the world. Is this all just the unavoidable effect of aging or is there something more sinister going on here?
Reid's telling of this tale was quite compelling. I found the book hard to put down. His writing was spare and unembellished but almost hypnotic in its propulsive quality. He is a relatively young person and yet he was able to compassionately relate the story of his characters growing old and losing some of the autonomy that they had enjoyed in their lives. Being able to do so, it seems to me, is a mark of real talent as a writer. It will be interesting to see where that talent leads him in the future.
2022 4-star reads 2022 books