Our Missing Hearts by Celeste Ng: A review

December 28, 2022
(Note to readers: Celebrating the holidays has put me behind in reviewing the books I've read recently, so until I catch up, my reviews may be a bit more truncated than usual.) 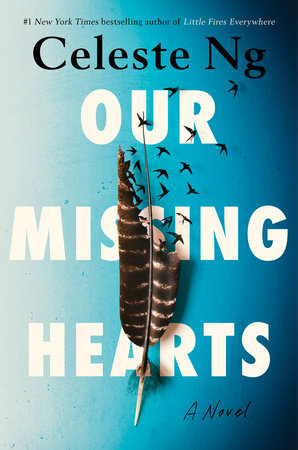 Celeste Ng's latest is a cautionary tale for our times. She describes a time in America when the government has passed and signed into law the Preserving American Culture and Traditions (PACT) Act. The act allegedly is meant to "protect" American values from the influence of foreign entities, especially China. But what it really does is provide a framework and an excuse for institutionalized racism and violence against minorities. Many books are banned and internet searches for cultural and historical subjects are blocked. Children are being taken away from parents who are deemed "bad influences" and people who dare to question anything about the act are being arrested.
The protagonist through whose eyes we see and experience all of these events is a twelve-year-old boy named Bird. Bird lives in a dorm at Harvard with his father, a former professor turned librarian at the university. His mother, a Chinese-American poet, had abandoned the family three years earlier because her poetry was considered subversive and her vocal opposition to the government put them in danger. Bird dreams of finding her.
Bird finds a clue that leads him to believe that his mother is in New York City and he heads out, on his own, to try to locate her. In NYC, he encounters a rich heiress who had known his mother when they were both penniless and we learn of a secret society of librarians whose goal is to help reconnect children with their birth parents after they have been forced apart.
Ng's description of this dystopian America is certainly enough to give anyone pause, but in the end, the whole thing felt a bit one-dimensional to me. The characters never really "grabbed" me and I wasn't able to identify with them and feel involved in their story. In short, Our Missing Hearts, while certainly not a bad book, seemed to me to be missing a bit of heart.
2022 3-star reads 2022 books Celeste Ng