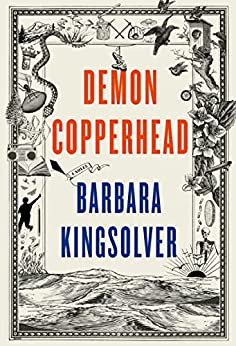 Barbara Kingsolver's latest is essentially her retelling of Charles Dickens' David Copperfield set in the southern Appalachian Mountains of Virginia. The main character of her opus was named Damon by his teenage mother but, of course, that was easily turned into "Demon" by the other kids.
Demon was born to a single mother in a single-wide trailer. His mother was a troubled adolescent who had not the first clue about caring for a baby. Demon inherited his good looks from his father who had died before he was born. Part of those looks was his distinctive copper-colored hair.
Demon soon became a ward of the state's foster care system. As such, he experienced an often traumatic existence, but from somewhere - either genes or some of his caregivers along the way - he developed a strong instinct for survival. In school, it was discovered that he had some athletic talent and that helped to smooth his way through the system.
Kingsolver tells her story through Demon's voice. The narrative is unsparing in its recitation of all the perils that he faced. Some of his foster parents forced him into child labor. The schools that he attended could be most kindly described as derelict.
After he was injured playing sports for his high school, he became addicted to painkillers. He had a long battle to overcome that addiction. He had some disastrous romantic entanglements and crushing personal losses. But that instinct for survival kicked in and he was able to overcome his challenges and setbacks.
This is quite a lengthy book of more than 600 pages and a LOT happens in it, all of which makes it a bit difficult to adequately sum up, but Barbara Kingsolver is such a terrific writer that the book never seems long. She keeps the action moving.
In all that action, she takes us to some dark and depressing places but there is so much beauty in her telling of it that one never feels overwhelmed, never feels frustrated, or wants to hurl the book against the wall. What writing talent it takes to achieve that and to make the reader feel empathy for these characters, some of whom are not that attractive.
I've already noticed that this book has a spot on most of the "best of 2022" lists that appear at this time of year. It would appear on my "best of" list as well. Another winner from Barbara Kingsolver.
2022 5-star reads Barbara Kingsolver