A World of Curiosities by Louise Penny: A review 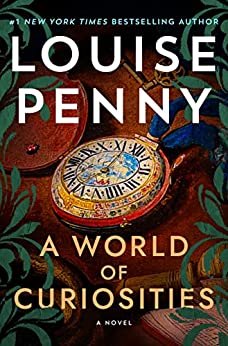 It is always a pleasure to spend time in the cozy little village of Three Pines and that continues to be true in Louise Penny's latest addition to her Inspector Gamache series. This is the eighteenth in the series and the stories have lost none of their freshness.
In this entry, we find two young people, a brother and sister, who had entered Gamache's and Jean-Claude Beauvoir's lives several years earlier when they were children. Their mother had been murdered, shattering her children's lives. And now they have returned to the village but the question is why? This is a complicated tale that has its roots in that long-ago tragic event.
Of the two, the brother and sister, the sister seems to have survived the tragedy with greater resilience. Her name is Fiona and she has lived with the Gamaches and now is graduating from school. Her brother, Sam, also attends the ceremony and seems determined to stay in Three Pines. This concerns Inspector Gamache because Sam is a very disturbed individual, possibly even psychopathic.
In another offshoot of the story, a historical letter written by a long-dead stonemason leads to the discovery of a walled-in attic space that contains some hidden treasures including a grimoire (which I learned is a book of spells and invocations) and a version of a famous painting called the Paston Treasure with its illustration of "a world of curiosities." The painting contains hidden messages and puzzles that alarm Gamache, alerting him to a possible danger to the village which he holds dear.
This was another entertaining read in this long and much-loved series about ordinary people living their lives in an ordinary village. All the beloved residents of that village are present once again to entertain the reader with their interactions, including my favorite, the prickly poet, Ruth Zardo, and her duck, Rosa. Everyone should have a Ruth and Rosa in their life.
2022 4-star reads 2022 books Louise Penny