The Thursday Murder Club by Richard Osman: A review 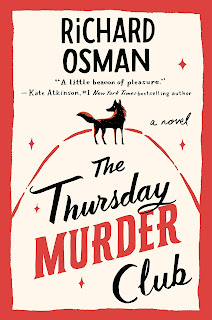 What an unadulterated pleasure this book was to read. Okay, it is not great literature, but then everything one reads doesn't have to be "great literature." Some reads are just for fun and The Thursday Murder Club was terrific fun.

The setting is England, always a great place for a murder and for eccentric retirees. In this case, there are four retirees who make up the core of the cast of characters. They meet each week to review cold murder cases. Joyce, Ron, Elizabeth, and Ibrahim are nearing their eighties, but their enthusiasm for life and their curiosity are undimmed.

The group of four live in the village of Cooper's Chase. It is a quiet retirement village and the residents are keen to keep it that way.

The group's leader/organizer is Elizabeth who has a somewhat mysterious background as (possibly) a spy. She has a wide network of friends and acquaintances who are willing to do favors for her. She excels at getting things done.

Elizabeth has a friend named Penny who is an ex-detective. She is somewhat haunted by cases that she was never able to solve and it is the files of these cases that she passes on to the Thursday Murder Club.

Each member of the group of four has his or her own set of skills. Ron is a former union boss who is a champion of the underdog. Ibrahim is a retired psychiatrist with particular skills at reading and understanding human behavior. Joyce, who narrates the story, is a retired nurse, new to the community.

PC Donna de Freitas is rather bored with her job in this quiet village. She is called upon to deliver a boring speech about security to the Thursday Murder Club and is surprised when they ask her to join them in solving actual murders. She is intrigued and jumps at the chance to join the group.

Then, this quiet village is racked by news of two new murders and suddenly the Thursday Murder Club has current rather than historical murders to solve. They employ all of their various skills in identifying and exposing a modern-day murderer.

Richard Osman wrote this story with a very light touch and a generous splash of British humor. It is the first in a proposed series and I will certainly keep an eye out for the next entry. Great fun!