A Heart Full of Headstones by Ian Rankin: A review 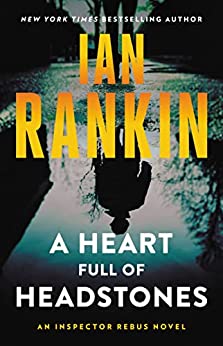 It seems that fate and all his bending of the rules over the years may finally have caught up with John Rebus. As this book opens, we find him on trial for some unnamed misdeed. Well, there are plenty of those in Inspector Rebus' past. Rebus has never let a minor point of law keep him from putting the bad guys away. But now, in retirement, he is finally being called to account. As he awaits his trial, we get some of the background that has led him to this point.

We find Rebus in a reflective mood. He muses about his career and about his relationship with the notorious "Big Ger" Cafferty. Both are older now and "Big Ger" is confined to a wheelchair, but he is still the head of his crime "family." Rebus and "Big Ger" always understood each other and managed to operate within their respective spheres without ever stepping on each other's toes.

But now it seems that "Big Ger" needs Rebus' help. A former employee of his has vanished and he asks Rebus to find him or to find out what happened to him. Cafferty insists that he has not had anything to do with the man's disappearance.

In a parallel plotline, it appears that the lid may be just about to blow on the corruption at the infamous Tynecastle Police Station. Rebus' protege, Siobhan Clarke is working the case that might expose it all and Malcolm Fox is there to keep an eye on things and hoping that he can contain the scandal and preserve the reputation of Police Scotland.

Added to all this, there is a new group of gangsters on the scene, evidently ready to move into any vacuum left as "Big Ger's" influence begins to fade.

Through it all, the retired Rebus and his faithful dog Brillo wander, just doing their thing. It all appears to be unconnected until it isn't. Eventually, the various plotlines do converge a bit. But this is evidently the first of a two-part series and we'll have to wait for the next installment for the ultimate denouement.

It may be that the old rascal Rebus is nearing his own denouement. His health is deteriorating and one wonders how much longer he can keep up the fight. One gets the sense that his own "headstone" may loom in the near future.

There are twenty-four books in the Rebus series. I've read them all beginning with Knots and Crosses back in the 1980s. Ian Rankin has kept the quality remarkably consistent over the years. Moreover, he has allowed his characters to age and grow in a believable manner, something which I think is often hard for writers to accomplish. In the beginning, Rebus was impatient for justice to be served and, as noted, he was perfectly willing to bend rules to see that his version of justice was served. As he now enters his "twilight years," he is just as irascible as ever but has perhaps gained a bit of patience and wisdom and might even occasionally be willing to consider another person's point of view. Nevertheless, he still maintains his passion for justice and his concern for the underdog. It's what makes Rebus Rebus.