Less is Lost by Andrew Sean Greer: A review 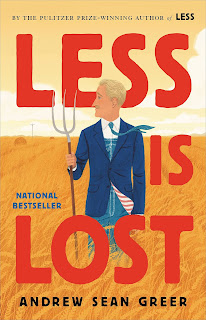 When I read the first book about this character in 2018, entitled simply Less, I loved it and him. Apparently, my tastes have changed somewhat since then because, in this latest entry, I often found him quite irritating and didn't like him so much. I still mostly enjoyed reading about his misadventures, but I sometimes got quite impatient with him, and, in the end, debated with myself about what rating to give.

Arthur Less, as we meet him this time, is in a committed if somewhat fraught relationship with his lover, Freddy Peleu. Things are going well for him professionally as well. He has achieved some moderate success as a novelist and the future suddenly looks if not rosy at least a light shade of pink. But with Arthur, disaster is always just around the corner, and as he sees it peeking around that corner, he decides to take action.

He has been offered a series of literary gigs that will take him on an extensive tour of the country and provide funds to alleviate his current financial crisis. He decides to accept the proposal and so off he goes, traveling in a rusty camper van named Rosina.  He meets an ever-changing cast of writerly characters along the way and takes on a black pug named Dolly who will be his constant companion.

Arthur's journey begins in what he calls the "mild, mild West" and continues through the South and finally up the Atlantic Coast. Along the way he grows a handlebar mustache and begins dressing in the bolero and cowboy hat costume of his idea of a true "Unitedstatesian." His disguise is not entirely successful, however, as he continues to be mistaken as either the wrong writer or a Dutchman.

His travels lead to encounters with his estranged father and with his own personal demons. What he learns along the way is that he can never escape himself.

As with the first novel in the series, Greer tells this story with a light touch and a lot of humor. There were instances of laugh-out-loud moments as Arthur continually gets himself into seemingly impossible-to-escape situations. But he is undaunted. In spite of everything, he perseveres, determined to dig himself out of his financial hole and to live his best life. Okay, maybe I do sort of like Arthur after all.