The Four Winds by Kristin Hannah: A review 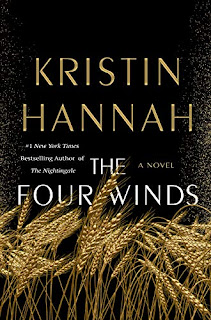 This book was, in many ways, a depressing read but then it is primarily about the Great Depression of the 1930s and its effect on the lives of ordinary people. The story is told through the character of Elsa, a young woman from West Texas, who was forced into a loveless marriage after getting pregnant. It was the way things were done then and, in some cases, still are.
Elsa was a gangly, rather unattractive young woman, but she had great reserves of courage and moral strength. She would need all of that when she was abandoned by her feckless husband and had to make a life for herself and her two children.
The marriage may have been loveless in regard to her husband, Rafe, but there was plenty of love from her in-laws, Rafe's parents, Rose and Tony. They recognized her quality and worth and supported her. In return, they became the beloved parents she had really never had.
As the middle of the country became the Dust Bowl, Elsa, like thousands of others, had to make a decision of whether to stay and fight to keep her land or to go and seek her fortune in the West. In the end, circumstances forced her hand and she headed west to California.
In California, she became a migrant worker hoeing and then picking cotton in the fields of the landowners. It was a hard life but it afforded a living for herself and her children and she found friendship and love among her fellow laborers.
She and her fellow migrants also found prejudice and discrimination. The landowners who needed their services viewed them as somehow a lower class of humans and sought to keep them from enjoying the full benefits of citizenship. But some rebelled against such injustice, including the man Elsa fell in love with, a young labor organizer, who fought for better working conditions and pay for the migrants.
Hannah gives us a stirring picture of the lives of the "Okies" who made the move west and of all the obstacles they faced, primarily the unreasoning prejudice with which they had to contend. It must have taken great courage to make that move, or maybe it just took the fact that they didn't have any other viable option. Perhaps that is the case with many of the great "migrations" in human history.
2022 4-star reads 2022 books Kristin Hannah