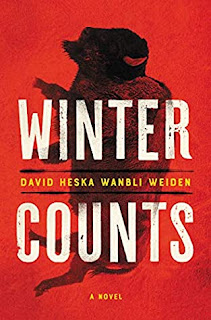 The title of the book is a reference to the Lakota calendar system that includes images showing the most significant events of the year. David Heska Wanbli Weiden is an enrolled member of the Sicangu Lakota nation and he has written a book that explores the Lakota culture, especially that on the Rosebud Indian Reservation in South Dakota.
His vehicle for this exploration is his character named Virgil Wounded Horse who is a kind of local enforcer on the reservation. People hire him to deliver their (or his) idea of justice if they feel that they have been failed by the legal system. Virgil lives with his teenage nephew, for whom he is the guardian. The boy's mother, Virgil's sister, was killed in an automobile accident some years earlier.
Virgil is not concerned about his nephew's use of marijuana, but when heroin makes its way to the reservation and the nephew becomes involved, his work as an enforcer takes on a personal dimension. He is determined to discover where the dangerous drugs are coming from and to put a stop to their sale on the reservation. He is convinced that they are coming from Denver and that he knows who may be responsible. He leaves his nephew in the care of his great-aunt and heads to Denver.
But before he goes he is approached by his ex-girlfriend who also has a personal interest in the case and she accompanies him to Denver. In Denver, they discover that the drug cartels are becoming more powerful and are expanding their reach and influence. But it seems that someone, possibly in authority on the reservation, is making it possible for the cartels to make inroads. Who could that person be?
This was David Heska Wanbli Weiden's first novel and it has been highly praised and has won several awards including the Anthony Award for Best First Novel. I can only conclude that all those critics read a different book than I did. It's not really a terrible book, but I would not say it is award-worthy. The writing is pedestrian at best. The characters are one-dimensional. As far as the main character, Virgil Wounded Horse, is concerned, that one dimension is toxic masculinity. His love interest's only dimension seems to be to "follow that man." She puts her life and her career goals on hold at the drop of a hat.
As for the plot, it is totally predictable, repetitive, and often downright cringe-worthy. Every chapter, indeed it often seems every page, contains a rant about the injustices perpetrated on Native Americans - or Indians as the author prefers. No rational person with any sense of honor would deny that such horrors have happened and in some instances still happen, but the constant repetition of reminders of them has the effect of inuring the reader and eventually making such events, dare I say, boring. I am sure that is not the effect the writer hoped to achieve.
All of that is not to say that the book has no redeeming features. The writer takes pains to describe day-to-day life on the reservation and the importance of religious practices and spiritual beliefs to that life. He also renders in an understandable and believable way the effects of violence, both historical violence and personal and familial violence on Lakota society. The individual and societal costs of the pain of that violence are inestimable. But overall, I found these strengths insufficient to completely offset the problems with the writing.
My rating: 3 of 5 stars
books David Heska Wanbli Weiden reading reviews