Our Country Friends by Gary Shteyngart: A review 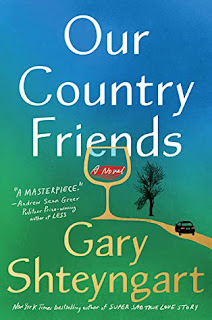 Gary Shteyngart has written a pandemic novel. Set in 2020 and beginning in March, the calamity that is COVID-19 was already well underway in the world and in this country.
At a country house surrounded by four one-bedroom bungalows in upstate New York owned by the Levin-Senderowskys, a Russian-born novelist and his Russian-born psychiatrist wife, five friends gather. There is a woman who is an extremely successful Korean American app developer; a man who is a struggling Indian American writer; a woman essayist from the South who specializes in provocative pieces; a man who is a world traveler with several passports; and finally, an actor who is never named but who may appear in a television show written by the novelist. The five join the Levin-Senderowskys and their precocious adopted Asian pre-teen daughter who is obsessed with K-pop. They will be together at the estate for the next several months as they try to wait out the pandemic.
Sasha Senderowsky is the Russian-born novelist. His main purpose in inviting these people to stay in his bungalows seems to be to convince the actor to work with him on the film that he wants to make. His wife is Masha and her main concern is enforcing social distancing and mask-wearing among this group. They come to think of her as the pandemic nazi. Their daughter, Natasha called Nat, appears to have special needs, perhaps being on the autism spectrum. She is a delight and the most sympathetic character in this group of fairly self-absorbed people.
The obsessions of these adults seem to be depressingly stereotypically American: money, sex, and booze. None of them appear to have any real self-awareness or a full appreciation of what is happening in the world. It goes without saying perhaps that their sense of their own importance in that world is extremely inflated.
Shteyngart no doubt intended this to be witty and satirical and at times he achieves that purpose. There are bits that are quite funny. Most of them involve the antics of Nat. But satirizing a situation in which millions have died, many of them needlessly, requires an extremely deft touch and I felt that this writer was not quite up to the task. Moreover, the characters are essentially stereotypes, and that, I guess, is supposed to serve as "character development" but again, it didn't quite do the trick for me.
This novel has been highly praised and I looked forward to reading it as I had thoroughly enjoyed Shteyngart's Super Sad True Love Story and I did enjoy parts of it. It was entertaining up to a point but the story became repetitive and less than a hundred pages from the end, it just sort of petered out. The ending itself felt like an afterthought, something tacked on for dramatic value.
I debated about what rating I should give this book and I have to acknowledge that my reaction to it may be as much a reflection of our current situation as it is a true assessment of the writing. It may be that if I read it for the first time a few years hence, I might find it more amusing. But I read it now amid all the baggage of December 2021 and it is what it is.
My rating: 3 of 5 stars
books Gary Shteyngart reading reviews