The Varieties of Religious Experience by William James: A review 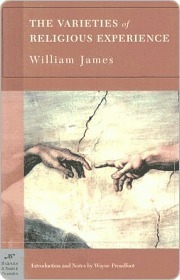 My husband actually owned this book before we got married and for all these years since it has languished on our bookshelves. I've always been curious about it and intended to read it. I decided that 2021 would finally be that year. It has taken me months, reading just a little bit at a time because that's all I could take before my eyes started to glaze over. To say that reading it was tedious would be a vast understatement.
The book was published in 1902 and was based on lectures that James gave in 1901-02 at the University of Edinburgh. No doubt the lectures were crafted for students of psychology at the university. They seem designed to emphasize the erudition of the lecturer who never uses one word when twenty will suffice and never uses a single syllable word if one with multiple syllables is available. The author also quotes extensively from other writers. Sometimes these quotes go on for pages, as do many of the footnotes. I think I am a fairly patient reader but my strong impulse here was to say, "Just get on with it! Say what you mean and let it stand. Stop beating around the bushes."
And yet I must report that this book was a best seller in its day.  Apparently, excessive wordiness was just what the readers of the day wanted. The winter nights were long and sources of entertainment were limited. Of course, there's no way of knowing whether buyers of the book actually READ it or if it was a vanity purchase.
Now, as to the title of the book, in my opinion, it should have been The Varieties of Christian Experience because that's really all he discusses. Mentions of any other religious faiths are merely done in passing. The writer evidently wished to stick to the religious beliefs of which he had personal experience, but it does cause one to wonder just how much he really knew about those other faiths. It could be argued that the Christian experience is easily extrapolated to other systems of belief, but I'm not entirely sure that is true and it certainly is not supported by this text.
James' primary focus is even narrower than that. He makes the distinction between Catholic and Protestant forms of Christianity and, in his considered opinion, the Protestant form is superior. Thus, the Protestant experience seems to me to be what his book is really about.
The writer's plan for the book was to explore individual rather than group experiences of religion. The examples that he uses to illustrate his points are almost never of ordinary people for whom one might be able to have some fellow feeling; they are stories of mystics and saints and of extreme born-again converts, all of whose experiences seemed occasionally interesting but rather foreign to me. Are the extremes of experience truly the best way to discuss the subject? That's debatable, I think, but again, James was writing for the audience of his day, not for me, and evidently, that audience lapped it up.
James' conclusion is that religious feelings are a good thing, a force for good in society, even though he himself says that such feelings are not a part of his personal experience. Perhaps that explains in part why he chose such bizarre cases to support his arguments.
My conclusion about his book is that it is an extremely frustrating and annoying read. It could have been one-half its length and that probably would have made it a better book. I've seen raves about what a talented and insightful writer James was, but I did not find this particularly insightful or well-written. It may well have pleased the readers of the early twentieth century; this reader of the twenty-first century not so much.
My rating: 2 of 5 stars
books reading reviews William James