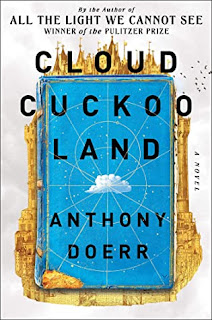 I wasn't sure I was going to like this one at all. It started slowly for me and I found it hard to get my head around the story Anthony Doerr was telling. But I kept reading because it's what I do and, in the end, I was handsomely rewarded. In fact, the story just about blew me away.
Doerr gives us five different stories of five different characters that take place over a period of centuries. They might in fact be five separate books, but all of these characters are connected in a special way. They are in many ways very similar characters, one might even say the same character. They are all outsiders who embark on what Joseph Campbell would call the hero's journey. They all have challenges and they suffer on their journeys but they all achieve a final homecoming. And each of the characters is fascinated by an ancient text, a supposed work by Diogenes called Cloud Cuckoo Land (actually an invention of Doerr's). It is the story of Aethon and all of his many adventures and misadventures as well as mishaps involving other characters. Fragments of that book are included in this novel. The ways in which the text survived destruction over the centuries is the theme that connects all of the characters.
The first character that we meet is Zeno Ninis in present-day Idaho. He is in his 80s, a veteran of the Korean War where he was a prisoner of war and learned Greek from a fellow prisoner during his captivity. He is directing a group of children at the local library in a play that he's written based on an ancient text that he translated called Cloud Cuckoo Land. Their rehearsal is interrupted by the intrusion of a sensitive young man named Seymour Stuhlman who has been radicalized by the destruction by developers of the wilderness that he loves. He has come to the library with a gun and an explosive device to leave the bomb in a corner of the library that shares an adjoining wall with the real estate developers. He's not interested in damaging the library; he wants to destroy the developers' office but since he can't get into that office, he places the bomb in the library in the hope that it will cause as much destruction as possible.
Then, before a resolution of the library incident, the scene shifts to five hundred years earlier. In 15th century Thrace, we meet Omeir, a harelipped teenager who society scorns because of his defect, and his two beloved oxen. His oxen are requisitioned by the Saracens for their assault on Constantinople. As their driver and caregiver, Omeir must go with them. Inside Constantinople reside Anna and her sister, Maria, orphans who live in a house of women who make their living embroidering robes for priests. When Maria is injured, Anna develops a side occupation as a cat burglar to raise money for her sister's care. On one of her burgling forays, she finds a book that tells the story of Aethon. She reads the book to her sister to comfort her. The stories of Omeir and Anna will eventually merge.
Finally, we have a young teenager named Konstance who lives at some undefined time in the future. Konstance is alone in a sealed vault on a spacecraft called Argos that is traveling in search of a new home away from the blighted, ruined Earth. She has never actually set foot on Earth. She was born on the spacecraft and after an epidemic kills the other passengers on the craft, she spends her lonely time remembering the story of Aethon that had been told to her by her father and copying what she remembers of the story onto scraps of paper.
The plot construction of the book takes us back and forth through the centuries and between these five characters' stories. It is only tantalizingly slowly that the nature of the connections between them comes into focus. Doerr is a master storyteller and his book is in ways small and large an homage to the power of literature to persist through the centuries and to affect and guide people's lives. At one point a bibliophile character in the book reminds us of all the works that have been lost: thousands of Greek plays, several books of the Bible, Lord Byron's memoirs, works by Melville, Shakespeare, and Aristotle. And yet, so much has been saved because people loved it and refused to let it die.
These characters from two epochs of history and the present and one of the future have disparate storylines and lives and it is a work of great creativity to be able to keep those stories coherent and compelling throughout. I found the conclusion of it all incredibly moving and shed more than a few tears. Yes, it really did blow me away and I'm glad I stuck with it through a sometimes confusing beginning.
My rating: 5 of 5 stars
Anthony Doerr books reading reviews