Powers and Thrones: A New History of the Middle Ages by Dan Jones: A review 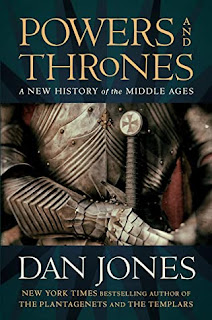 Historians of the Middle Ages, roughly from the fall of the western Roman Empire until the dawn of the modern era in the 16th century, take considerable umbrage when the period is referred to as the "Dark Ages." They will argue that in spite of the barbarism and ignorance that were certainly a part of the era, it was not dark at all. It was in fact a period of considerable enlightenment that brought the Carolingian Empire that was produced by the sophisticated culture of the Germanic tribes, the legacy of the Roman Empire that continued brightly in Byzantium, and the many contributions of Muslim culture and writers throughout the Mediterranean area. Dan Jones will certainly make that argument and he does in his latest book, Powers and Thrones: A New History of the Middle Ages.

The book is 656 pages long and yet it feels concise and approachable for the general reader like myself. Jones organizes the vast and complicated historical record of the era into a compelling story that reads almost like a novel. He makes that story relevant to the modern reader by showing the connection of events during the period to events of our day, and there are many connections.

He also keeps the reader's interest alive through the long book by balancing the recording of events with descriptions and discussion of some of the vivid personalities that were responsible for those era-defining events. Historical anecdotes abound and he shows how they have helped to create the building blocks of the modern age.

He shows us that Ancient Rome lived on (and lives on) as the source of much of the law that still guides the West. It also lives through all the Romance languages and through the Christian faith that it was largely responsible for imparting to the world at large. The Germanic invasions of the Roman Empire that helped to bring it down were not simply a conquest by barbarians for the tribes created much of the political framework that still exists in Europe today.

The Muslim conquest still affects the modern world as well since they brought with them their science and learning, but it was also the source of many of the religious splits and fragmentation that continue to this day. Moreover, the arrival of the Vikings shaped future Anglo-French connections, alliances, as well as competitions. And it provided the first connection between Europe and North America.

The book is arranged in basically chronological order but it is also organized around major themes and ideas that shaped the era. So, within the chronology, the writer sometimes skips around to show the progression of certain important ideas through the whole period. An exploration of knighthood, for example, considers its development and importance through eight centuries. Although this might occasionally be confusing, it does help to show how Europe - and this book essentially deals with Europe rather than the whole world - evolved during the period.

Dan Jones has provided us with a highly readable and understandable exploration of the complicated period that we know as the Middle Ages. It was the period that in so many ways made us who we are today and we still live with its accomplishments as well as some of its complexities. It must have been difficult to organize and fit all of that into a book of manageable length. Fortunately, Jones was up to the task. I would definitely recommend the book to anyone interested in this fascinating era.