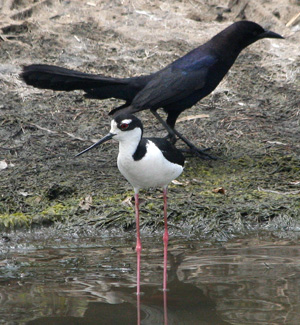 Black-Necked Stilt and Great-tailed Grackle photographed at Anahuac National Wildlife Refuge.
*~*~*~*
We hear so much in this country every day about people who do not trust science and who deny even the basic tenets of science. Consequently, I found the results of this survey particularly heartening. It seems that trust in science internationally has increased by about ten points since 2018.
*~*~*~*
Anthropogenic climate change is such a monumental problem that it is easy to feel hopeless about it. After all, what can one person do? Well, according to The Revelator, it is actually possible for individuals to take positive actions on their own. They have suggestions for a 30-day climate action plan.

And here's an ecologist who believes that. He says that fighting climate change and protecting biodiversity starts at home. One way to start is to get rid of the lawn.

California has plans to launch a system for ranking heat waves. The idea is that categorizing the weather events will help communities to better plan for reducing heat-related fatalities.

In the largest single translocation of its kind, thirty white rhinos have been flown from South Africa to Rwanda in a bid to secure the future of this endangered species. They have been rehomed in Akagera National Park in that country.

The stock market helping preserve coral reefs? So it would seem. A Nobel-winning economic theory is being used to select 50 reefs as the ones most likely to survive climate change and help reestablish reefs elsewhere.

The fragile ecosystem of Antarctica is being threatened by climate change, invasive species, and human activity.

A federal grant program from the Department of Transportation that had been primarily used for highways in the past is now being directed toward more car-free means of getting around.

Data analysis has revealed which birds are the biggest jerks at the bird feeders. The researchers ranked the American Crow as the worst with Common Grackles closely following. I don't get crows at my feeders and only occasionally grackles. I can say unequivocally that the biggest bullies here are Northern Mockingbirds and Red-bellied Woodpeckers.

The social-spending bill that is currently before Congress would place limits on offshore oil and gas drilling. In fact, it would outlaw most such drilling.

The worst offender in producing the plastic waste that is inundating the planet is the United States. We produce about 42 million metric tons of plastic waste each year which is more than all of the E.U. countries combined.

How can we design policies and strategies for adaptation to climate change into the future? Ancient cities that survived over centuries have a lot to teach us about that.

Portugal has created the largest marine sanctuary in the North Atlantic. The reserve spans 12 nautical miles around the Selvagens Islands off the northwestern African coast. It covers 1,034 square miles.

Shockingly, a new report found that one-third of the world's sharks and their relatives are threatened with extinction.

Another new study reveals, not surprisingly, that Atlantic hurricanes are increasing in their number and ferocity. They are the most costly weather disasters for this country which would seem to be an incentive to try to do something to prevent them.

The northeastern part of Brazil is slowly becoming a desert. The area has long been a victim of droughts but climate change is causing them to become more intense, leaving the land barren.

As the Arctic is being transformed by climate change, it is receiving more rain and less snow. The change does not just affect the Arctic but the whole planet because "What happens in the Arctic doesn't stay in the Arctic."

Thacker Pass in Nevada is rich in lithium deposits but it is on land that is sacred to the Paiute people. They are fighting to preserve their land from a lithium mining operation.

Ten years ago, some of the world's biggest companies pledged to change their practices in order to help end deforestation by 2020. How successful has that pledge been?

Guyana, at least, offers a bright spot in the preservation of the rainforest. Trees cover 90 percent of its land and the country has been remarkably successful in protecting it.