The Bat by Jo Nesbø: A review 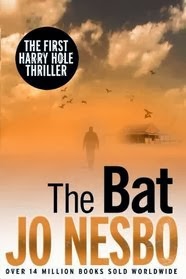 This was actually the novel that introduced Harry Hole to the reading world. Unfortunately for those of us who read English, it was not translated for us until 2013. This was after I had read four of Jo Nesbø's later books in this series that, for some reason, had been translated earlier.

So I had to read The Bat out of sequence - not my favorite way of experiencing a series. It was interesting though, having read the later books, to go back and see the beginning, to meet the younger Harry and to learn more about his troubled background and particularly how alcohol came to rule his life at times.

This is a very different Harry Hole novel from the others I've read because we find our Norwegian detective in the exotic (for him) setting of Australia, where he has been sent to be the liaison for the investigation of the brutal rape and murder of a Norwegian national in Sydney. There, he finds himself partnered with an Aboriginal detective in the Sydney police department.

His new partner, who becomes his friend, is his guide through the cultural puzzle of Australian society. Often, the novel reads like an anthropological text as the detective explains to Harry some of the myths of the Aboriginal people and also some of the tragedies that have been perpetrated on them by the dominant white culture.

The woman who was a minor Norwegian television personality and who was killed had platinum blond hair. At length, the detectives discover other women with such hair who have been raped and/or killed in a similar manner and they begin to suspect that they have a serial rapist/killer on their hands. Harry's partner in the investigation seems to be trying to lead the investigation into a particular path and we begin to suspect that perhaps he knows more than he is willing to admit about just what is going on.

The plot is complicated by a traveling clown act whose schedule of performances seems to have something to do with the murders and by various encounters with street people, prostitutes and their pimps, and other people who may have information or may be connected to the crimes in some way. Harry, at a certain point, is sure that he knows who the killer is, but the person he suspects seems to have an unbreakable alibi.

Other horrific murders further complicate the story and every time I thought I had things figured out, Nesbø threw another twist into the tale. Red herrings abound and we begin to wonder, along with Harry, if the mystery will ever be solved.

The complicated plots and the misdirections seem to be a hallmark of Nesbø's mystery novels. They do add a certain thriller aura to the books and they definitely make the reader want to keep on reading to figure out just where this story is going. One can clearly see in this first of the series that the pattern is being set and future mysteries are presaged.

I really enjoy this series and I am particularly appreciative of the translator, Don Bartlett, who is able to render the stories into a very smooth and flowing narrative, something that not all translators, particularly of Scandinavian works, are able to accomplish. I now look forward to catching up with Harry Hole in the second book of the series, The Cockroaches, which has evidently this year been translated into English also.

Jo Nesbø is a talented writer and I hope there will be more entries in this very interesting series.