December 11, 2013
For the last few weeks, my garden has been home to several Monarch butterfly caterpillars. This is cause for celebration because Monarch butterflies have been so scarce in the garden this year, but, finally, as the migrants have made their way south, several of them have stopped over in my yard to deposit their eggs on my milkweed plants. The eggs that successfully hatched have resulted in hungry caterpillars which have now stripped most of the leaves from those plants.

I've been on the lookout for the next stage in butterfly development, but I had not seen any evidence of it until yesterday. 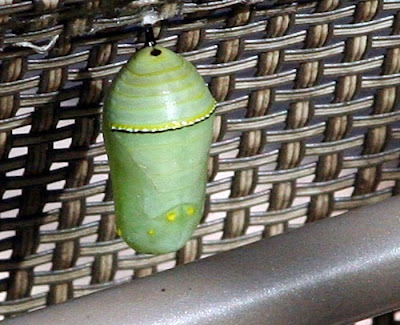 I found this lovely green Monarch chrysalis hanging from the back of one of my patio chairs.

Now, butterfly development proceeds in a fairly mundane fashion up until the chrysalis point. The female lays the egg on the host plant - the milkweed in the case of the Monarch. A tiny caterpillar hatches after a few days and begins to devour the plant. All caterpillars are born hungry and, as they consume their nursery plant, they grow fairly rapidly. But when they have eaten enough, something inside them tells them that it is time to pupate, to transform into an adult.

At this point, the caterpillar generally will wander away from the plant he has been dining on and will find a sheltered, safe spot in which to attach the protective shell known as the chrysalis, inside which the critter will transform itself into a butterfly. This whole process seems like nothing short of magic.

Within the chrysalis, much of the body breaks itself down into what are called "imaginal" cells. These are undifferentiated, like stem cells, and they have the capacity to become any type of cell. The cells then put themselves back together in a whole new shape in a process called "holometabolism." For most butterflies, including the Monarch, this transformation can take about two weeks until a whole new adult butterfly emerges..

See? Like I said, it borders on the magical.

Here is a video which shows the complete life cycle of the Monarch butterfly, including the formation of that magical cocoon, the chrysalis.