December 18, 2013
I have this "weed" in my garden. Actually, I have many weeds in my garden. The weeds may even outnumber the plants that I've planted on purpose, but this particular weed turns out to be special.

In the first place, it came to me from the nursery. I had bought a white mistflower from one of my favorite nurseries. I brought it home and planted it. I noticed there was a separate little plant in the pot, but it was mixed in with the mistflower and I actually thought at first that it was part of the plant I had bought. As the mistflower grew, it became obvious that this was a separate and different plant. I dug it out from the mistflower planting and normally would have put it on the compost pile, but curiosity got the better of me. I planted it in a bed nearby and it flourished.

All of this happened last year and in the late summer, the mystery plant bloomed. The plant was still fairly small and the flowers were few but I set about trying to identify it. I decided pretty quickly that it was in the aster family, but that is one BIG family and it was harder to narrow it down to a specific plant. I finally decided that it was either camphor weed (Pluchea camphorata) or marsh fleabane (Pluchea purpurascens) and it seemed that the most likely candidate was the fleabane.

I noticed that the butterflies and bees seemed to like those blossoms and so I decided to keep this "weed," this free Texas wildflower from the nursery.

The plant had another good year and when it bloomed this year, I took pictures. 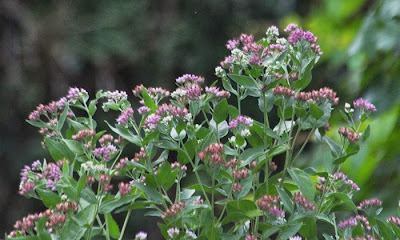 The plant was covered in these purplish blossoms and the blossoms persisted for several weeks, a real treat for the bees and butterflies.

Finally, the blooms did fade and seedheads developed. They were not particularly attractive and in the normal course of things, I might have deadheaded the plant and removed those seeds, but "normal" did not apply to my late October and November this year. I got sick and didn't get done any of the minimal fall cleanup that I would usually have done in the garden. That included removing seedheads. 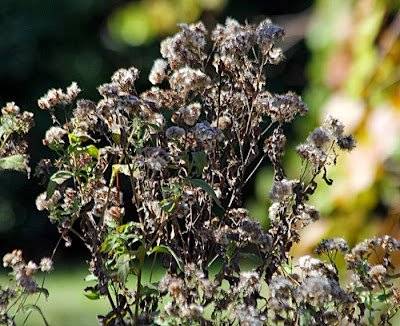 After a while, my fleabane looked like this. It's in my direct line of sight when I sit in my favorite spot on the patio, and I've been thinking that maybe I should still do a bit of tidying up there, but I just haven't got around to it.

Then this week, I was sitting on the patio, watching the birds and idly staring in the direction of the fleabane when I became aware that there was a bird in the plant. I picked up my binoculars for a closer look and smiled ear to ear when I recognized an Orange-crowned Warbler!

Now, you may not be too impressed with that. Orange-crowned Warblers are very attractive birds, I think, but they are not one of the flashy types that birders typically set their sights for. But as a backyard birder, I keep close track of the birds that visit my yard. Orange-crowned Warblers are a winter visitor, but they have never been as numerous as our other two "winter" warblers, the Pine and the Yellow-rumped. Last year, I looked in vain for an Orange-crowned all winter long. I never saw one. And now, here a few days before winter officially begins, was one feeding on wildflower seeds in my yard.

I watched the bird for several minutes as it went all over the plant, plucking seeds. Unfortunately, I did not have my camera with me and could not record the event. I was afraid to get up to go get it, because I would surely have scared the bird away. So, I just sat and enjoyed the sight while it lasted.

And what, you ask,  is the lesson that we learn from this experience? It's simple. Gardeners should not be in such a rush to tidy their gardens up in the fall. Those unattractive seedheads can provide nourishment for birds or other critters. That leaf and twig debris can help provide winter homes and protection from the weather for any number of small reptiles or amphibians. Brush piles provide welcome cover for small songbirds, where they can escape from predators or even spend the cold winter nights.

We should look at our gardens as the homes for wildlife that they surely are, rather than as a reflection on our characters if they are not kept constantly neat and tidy. Nature actually prefers a bit of untidiness. As stewards of the land, we should be willing to accept that, too. I know that I'll be leaving those fleabane seedheads alone and hoping for another visit from that Orange-crowned Warbler.
habitat gardening seedheads