Beyond Reach by Graham Hurley: A review 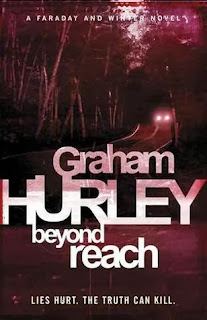 The more I spend time in the company of Detective Inspector Joe Faraday and former Detective Constable Paul Winter the more I enjoy that company. I find myself feeling rather sad to be leaving them when the book has ended. That often happens with series that I enjoy and I do read a lot of series. Beyond Reach was number 10 in the Faraday/Winter series. Fortunately for me, there are still a couple more left.

The thing that makes this particular series so enjoyable for me are the disparate personalities of the two main characters.

Faraday is the buttoned-up committed lifer in the Job (always written with a capital J), i.e, the police. As the series has progressed, we see his frustration growing with the Job and with the direction that his society seems to be taking. Moreover, he longs for a committed relationship with a woman he can love, but it often seems that that is never going to happen. His solace from all his frustrations is Nature, and especially the birds of Nature. Some of the best (for me) passages in the books describe his birding expeditions and list the birds that he sees. They are so meticulous that one gets the idea that Graham Hurley himself must be a birder. As a long-time (now retired) government employee and a birder, I identify a bit with Faraday, especially with his frustrations with his work.

Paul Winter, on the other hand, is a bit of a free spirit, but he was no less committed than Faraday all those years to the Job. He always had a hard time playing strictly by the rules set by his employers. He was more interested in catching the bad guys and putting them away than he was in any rule. What really irritated his superiors was that his way of policing got results. He was one of the most effective coppers they had. But finally his butting heads with those in authority combined with his own frustration with the Job led him to turn in his warrant card and look for another line of work. The irony is that he found it and a lot more satisfaction working for one of the "bad guys" he had spent years trying to incarcerate. Bazza MacKenzie is now supposedly a reformed character, pillar of the community and all that, but is he really?

The story here is how routine follow-the-rule police methods can fail victims in complex circumstances.

A young man is bullied mercilessly for months and is finally murdered by his tormentors, but the police, even though it seems well known who the attackers were, are unable to secure the evidence needed to convict them. They walk free and continue their harassment with a new victim, the young man's mother who had sought justice for her son. Months later, late one night, the leader of the group is run down on the streets and he dies at the scene. The investigation leads the police to the mother of the first victim. Had she given up on the justice system ever providing closure for the tragedy she suffered and decided to take justice into her own hands?

Meantime, Bazza's daughter, a lawyer who looks after the interests of the family business, has become involved in an extramarital affair - with a policeman! Bazza is outraged and puts Winter on the case to sort things. Winter is not pleased with this domestic assignment, but at the same time he seeks to bargain in order to extricate himself from another assignment, one involving overseeing a social service organization set up by his boss.

Faraday, in trouble with his superiors because of his sympathy for the driver of the hit and run car as well as members of the community who take a stand against the neighborhood bullies who were a part of that victim's gang, is given a new assignment to keep him out of the way - working on a cold case involving a rape that happened more than twenty years earlier. He pursues the clues in the case to a surprising and heartbreaking result.

This was an intricately plotted tale that kept the reader on her toes trying to follow all the twists and turns. I actually was able to solve the final mystery well before the end of the book, but I was fascinated to follow along with how Hurley would bring the whole thing to a conclusion. All in all, an engrossing read.