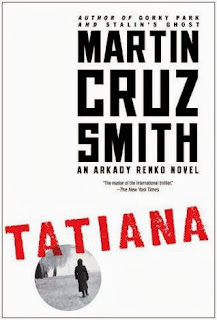 Within a few days, the fearless reporter Tatiana Petrovna falls to her death from her sixth-floor apartment in Moscow and a mob billionaire name Grisha Grigorenko receives a bullet to the head and is buried with all the trappings of a lord.

Meanwhile, Tatiana's body is "lost" by the morgue, then found and secretly cremated. Investigator Arkady Renko is suspicious of connections between the two deaths. No one else cares to see any connections.

As usual, the cynical and analytical Renko is on his own as he pursues his investigation of Tatiana's death, even though the prosecutor's office has decided that there is no case. Tatiana supposedly committed suicide. But there is a witness who heard her screaming as she fell. Does a woman who commits suicide by jumping from a great height scream on the way down?

Renko goes to Tatiana's apartment and finds tapes in Tatiana's voice that describe horrific crimes. Her account of these crimes does not agree with the Kremlin's official versions. Did her investigations mark her as an enemy to the government and was that government involved in her death? Arkady Renko is determined to find the answer to that question.

The evidence found in Tatiana's apartment leads Renko to Kaliningrad, a Cold War "secret city" that seems to be at the center of the mystery. Tatiana's sister lived there and, there, Renko meets with a famous poet who was once Tatiana's lover. Kalinigrad also is the city with the highest crime rate in Russia. Human life seems cheap there.

Arkady Renko's ward, the young chess prodigy Zhenya, gets his hands on the notebook and he and a friend, another chess prodigy, begin to crack the code and figure out what the notebook says. While they work on this project in Arkady's Moscow apartment, Arkady himself continues to pursue his investigations in Kaliningrad.

Tatiana is written with Martin Cruz Smith's typical combination of black humor, irony, and romance, as well as a keen understanding of Russian society and the way things work in the bureaucracy there. The characters are richly drawn and the story is entertaining. I didn't feel that it was one of Smith's best, but it was an enjoyable read and Arkady Renko is always a good companion.

Renko lives with an inoperable bullet rattling around in his skull and with the knowledge that that bullet could spell his doom at any time. He has been warned against exertion, but he has come to terms with the possibility of death and he chooses to pursue his calling in life, the investigation of crime, with stoicism and fatalism. And with passion, because, in spite of everything, he really does care about pursuing justice, difficult though that may be in the society in which he lives. The important thing to Arkady may not be that justice is actually achieved but that he stubbornly never gives up the fight to achieve it. Arkady Renko, cynic, may also be the last of the Russian romantics.