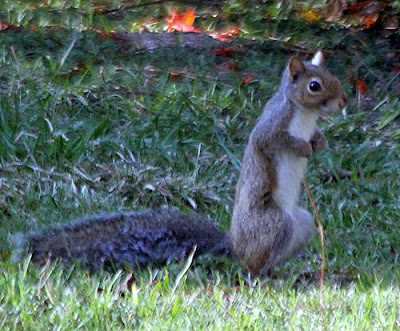 A half-grown gray squirrel kit photographed in my backyard over the past weekend.

The gray squirrel (Sciurus carolinensis) is native to the eastern and midwestern United States and to the southern portions of the eastern provinces of eastern Canada. But they have never been resident in my yard in the twenty-five years that we have lived here, and so it was a surprise when three of them turned up in my backyard over the weekend.

The first to show up was an adult female who was feeding under my bird feeders in the yard. I went inside to get my camera to document her presence, but while I was gone, she disappeared. However, in just a little while, two very young gray squirrels came to the same area to feed. The adult's babies? Maybe. 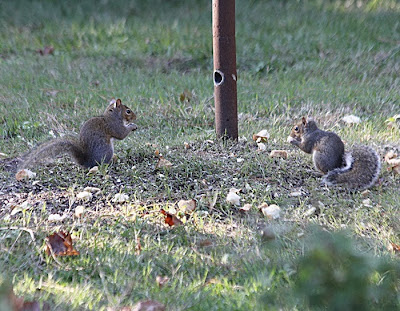 The two little squirrels were picking up seeds and also munching on some pieces of stale rolls that I had scattered on the ground.

Now, our yard is and ever has been well-populated by fox squirrels (Sciurus niger), the big rusty colored squirrels, largest of the North American tree squirrels, but I cannot recall ever having seen the smaller gray squirrel in our yard before. Since the range of the gray squirrel and the fox squirrel do overlap - although the main range of the fox squirrel is more to the west - it's not unprecedented that they should show up in the same suburban backyard. But it certainly was cause for a double-take in my yard.

The gray squirrel is a highly adaptable and prolific species that has been introduced to some of its non-native regions in the United States and also in the United Kingdom and in Italy. Its introduction in the UK has proved to be a classic case of the hazards of introducing a non-native, potentially invasive species. It has displaced the native red squirrel there and has led to fears that the red squirrel might be completely replaced by the gray squirrel. Something similar is also happening in Italy, spreading fears that the species could become invasive in other parts of Europe.

But back here in its native territory, the expansion of the gray squirrel is kept somewhat in check by a variety of predators, including weasels, raccoons, hawks, owls, domestic and feral cats, snakes, dogs, and even humans. Squirrel hunting seasons are popular in some areas of the country.

These squirrels are most active in the early and late hours of the day. They usually avoid being out and about in the middle of the day. They are active at all seasons and do not hibernate.

Of course, gray squirrels are known for their acrobatics, particularly their cleverness in being able to access the supposedly inaccessible backyard bird feeder, where they can become a nuisance. My feeders, however, are protected by squirrel baffles and so I can just sit back and enjoy their antics as they glean under the feeders.