They have a scheme

August 30, 2013
In a week when we commemorate the 50th anniversary of the 1963 March on Washington and Dr. Martin Luther King Jr.'s "I have a dream" speech, it has been depressing to watch the reaction to all this from the right-wingers. Depressing but not entirely unexpected.

First of all, the right-wing media led by Fox News went into a frenzy because no Republicans or conservatives were invited to speak at the event. As often happens with this media's stories, that one was totally false. In fact, most of the names that are known as national leaders of the Republican Party were invited to attend and to speak. They all declined.

If one of them had accepted, what could he have said? After all, this is the party that has worked furiously all year, especially since the Supreme Court decision stripping part of the protections of the Voters' Rights law, to roll back the "Dream." State after state, led by Texas, has enacted draconian voter ID laws that require identifications that many people of color, younger people, and college students do not have. They have moved polling places to less convenient locations. They have reduced time for early voting, and on and on. Anything to restrict and discourage the people that they don't want to vote from voting.

Then, of course, there is the gerrymandering issue. In states controlled by Republicans, the congressional districts have been gerrymandered to ensure that their party has an extreme advantage in elections, so that incumbent representatives become completely entrenched and cannot be thrown out of office.

This is not democracy and this is no dream. It is a nightmare. Great democracies do not discourage their citizens from voting. On the contrary, they do everything possible to encourage people to vote and to make it easier for them. In Australia, as I understand it, it's even illegal not to vote! Now there's an idea that I could get behind.

The only hope for our democracy seems to be to get the Republicans out of positions of power, since they appear to be determined to destroy the government and perpetuate themselves and the 1% as the ones in control. Only then might there be some reasonable expectation of finally seeing the dream fulfilled. 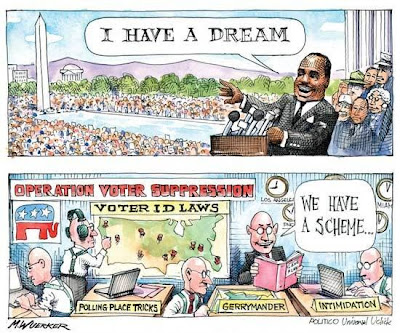 (Hat tip to Tom Tomorrow of  DailyKos.com where I found this cartoon which really sums up the whole thing.)
Martin Luther King Jr. voters' rights