The Warbler Guide by Tom Stephenson and Scott Whittle: A review 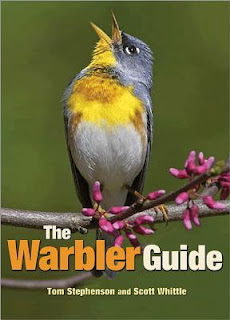 Wood warblers are sometimes referred to as the rock stars of the bird world, and they certainly do draw vast and enthusiastic crowds of birders when they are in migration. And even as devoted followers of loud rock concerts might suffer from damage to their hearing, warbler fans often suffer from a common malady. It is known as "warbler neck." It comes from standing long periods under a large tree, looking straight up into its leafy canopy, trying to see a tiny bird perhaps 5.5 inches long and weighing maybe 1/3 of an ounce. For that is where most of these particular rock stars are routinely found and seeing them is not easy.

If you are able to actually see one and get a good look at it in spring and you have a moderately good field guide nearby, you will probably be able to identify it, because warblers in springtime are at their most colorful and most distinctive. If you encounter that same bird in autumn when it has shed its breeding colors and taken on the dull cloak of winter, you might not recognize it at all.

Well, Tom Stephenson and Scott Whittle are out to help you with that. They have put together a very useful book to aid the serious warbler fan in identifying the object of his or her devotion. Their guide to identification covers not just the markings of the birds but how to age and sex warblers on the wing and, especially, because their song is one of their main identifying features, how to listen to warbler songs and how to identify their "chip" and flight calls.

There are some 56 species of warbler that spend at least part of the year - usually spring and summer - on the North American continent and this big book features more than 1000 color pictures of them. These photos cover all color phases of the birds and show them in various poses. There are even visual "quick finders" included which show the birds side by side from different angles, including that angle of looking at the underparts of the bird when you are standing under that tree and looking straight up. Detailed species accounts show multiple views with diagnostic points emphasized and direct comparison of the plumage and songs of similar species.

The book uses sonograms to teach a new system of song identification that makes it easier to understand and hear differences between similar species, and, since this is the age of technology, there are interactive companion apps for iPhone and iPad.

In addition to all that, there are field exercises, flight shots, general identification strategies, and even quizzes to help you familiarize yourself with warblers and have a better shot at actually being able to identify that tiny scrap of feathers when you see it moving quickly from limb to limb in the field.

It is an impressive book that certainly will find a space on the bookshelf of many serious birders.

(A free copy of this book was provided to me by the publisher for the purposes of this review. The opinions expressed here are entirely my own and were not compensated in any other manner.)