August 21, 2013
If you are a person of a certain age, you may remember the summer of 1969 when Neil Armstrong took his "giant leap for mankind" on the Moon. Around that same time, there was a song that was very popular and was getting a lot of play on the radio. It was called "Poke Salad Annie" and told the story of a poor Southern girl who picked a wild plant called pokeweed and cooked it as a vegetable.

Annie, however, would have actually called her vegetable "poke salet." It is a vegetable that many poor Southerners were then, and probably still are, very familiar with. It is properly known as pokeweed (Phytolacca americana) and it grows wild and rampantly in the eastern United States. It is a member of a family of perennial potherbs that are native mostly in Africa and the New World.

The plant's name supposedly is derived from the Algonquian word "pakon" or "puccoon" which referred to a dye plant. It is also sometimes spelled "Polk" and its leaves were adopted as symbols in the political campaigns of the 11th president of the United States, James K. Polk.

The funny thing about this plant is that the young, tender leaves which are used as a green vegetable like spinach are highly toxic. Anyone who wants to eat it must be very careful to handle it properly or their meal could wind up making them very sick. The leaves must be boiled twice and the first water discarded.

In spite of the labor-intensive preparation needed, many people do look forward to picking those first leaves that poke out of the ground in spring. And, in fact, in some specialty markets, you can even find the canned, preserved leaves prepared and ready for you to eat.

The Allens use the traditional Southern spelling of the plant on their cans.

Several years ago, pokeweed got started as a weed in my garden, probably planted there by a birds. The berries of the plant are greatly loved by birds, and since I love the birds, every year I leave one or two of the plants to grow in my garden. From those tiny, dark green leaves that first poke out of the ground in the spring, the plant will grow rather quickly into a robust shrub. The one that is growing in my backyard this year is about eight feet tall and just as wide.

In late spring, the plant begins to produce long clusters, or racemes, of white flowers and the shrub can be quite attractive when covered in these flowers. The flowers draw the pollinators in droves and slowly those flowers become green berries. Over the summer, the berries ripen into a shiny purple-black and birds come from all around to devour them. (The toxicity of the plant seems to have no effect on birds.) 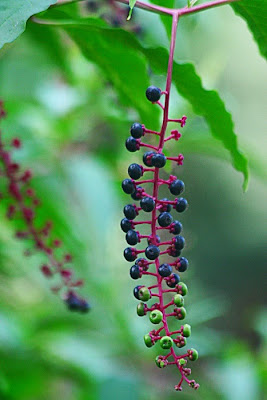 The berries don't last long once they ripen. You can see that some of the ones on this raceme have already been plucked by the birds even as some at the tip are still green. Northern Mockingbirds, in particular, love these berries and do daily battle over them.

The berries were highly prized in earlier days as a source for dye or for use as a red ink. It was sometimes even used to help color wine, a chancy practice since the berries, too, are poisonous for humans. Today, the plant is prized mostly by habitat gardeners like me and by those adventurous souls who like to live on the wild side and pluck their food from Mother Nature's own garden, the descendants of Poke Salet Annie.
Nature pokeweed