The Devil's Star by Jo Nesbø: A review 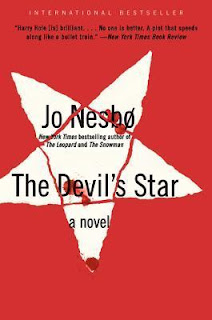 This book did not begin promisingly for me.

After being given the leeway to investigate the death of his friend and partner Ellen, Detective Harry Hole has spent months following leads and his intuition. He has become certain in his own mind that the man behind Ellen's murder as well as the burgeoning illegal arms trade in Norway is Inspector Tom Waaler, his colleague on the Oslo police force. He has even found one witness who is able to confirm at least part of his suspicions - a witness who promises to testify.

But when the time comes for Harry to present his story to his boss, the witness refuses to speak. Harry is left hanging with an incredible story and practically nothing to back it up. The fact that it is the truth counts for naught. As The Devil's Star begins, he has reached the end of that process.

Completely frustrated by his inability to prove his case against Waaler, Harry has been driven to drink again - literally. He has fallen off the wagon in the worst way possible and seems bent on self-destruction. He has sabotaged his relationship with Rakel and Oleg, whom he loves, and he has made it impossible for his loyal boss who has stood by him and defended him through thick and thin to continue to do so.

Reluctantly, Moller tells Harry that he has signed the papers to terminate him from his job and they have been sent on to the next link in the chain of command. As it happens, that link in currently on vacation, though, so the papers won't be signed for a couple of weeks.

Meantime, it is the middle of summer in Oslo and the city is sweltering. Everyone who can has left the city for vacation. The police force is stretched thin. As luck would have it, that is when a crime wave of murders breaks out.

It begins when a young woman is murdered in her flat. When her body is found, police discover that one of her fingers on the left hand has been cut off and that a tiny red diamond in the shape of a pentagram - a five-pointed star - has been placed under one of her eyelids.

Harry is assigned to the puzzling case along with...wait for it...Tom Waaler! Drunk most of the time and hanging on to his job by his fingernails, Harry feels that he has to play nice and cooperate in the investigation.

Then, at five day intervals, other murders occur and all of the bodies are left with the same star-shaped red diamond. It looks like a serial killer is loose in Oslo.

Harry sobers up and is determined to find the killer. At the same time, he is even more determined than ever to find proof that will expose Tom Waaler for the neo-Nazi, gun-runner, rapist, murderer that he is. It looks like, once again, Harry Hole has bitten off more than he can possibly chew!

Once I got past Harry's lost days of alcoholic stupor, the story began to pick up steam and I got really engrossed in it. Jo NesbØ is a very skillful plotter of these mysteries and he builds suspense and anticipation to a very high pitch before he gives us the climax that we have been waiting for all along. It is entirely understandable for me that his books are such best sellers throughout Europe and that his writing has been compared to people like Henning Mankell, Michael Connelly, and Ian Rankin. As he becomes better known here, I think it is inevitable that his books will be best sellers in the U.S. as well.

This is the third Harry Hole mystery that I have read and I count it as the best one so far. Now, I understand that the first two books in the series, The Bat and Cockroaches, have been released in English translation so I look forward to being able to read them. And then, there are five more following The Devil's Star in the series, and counting. It is very satisfying to realize that there is lots of entertaining reading ahead as I follow the adventures of a detective who has become one of my favorites.