Tenth of December by George Saunders: A review 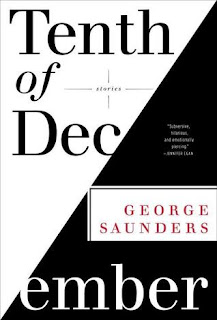 Okay, let me confess my prejudice right up front. I am really not a big fan of short stories. There. Now I have marked myself as a Philistine. (Except, of course, the Philistines weren't. They actually had quite a highly developed and sophisticated culture, but, in the end, they were defeated, and the victors got to write the histories. Thus, the Philistines have gotten a bad rap for all the years since.)

But, short stories. Perhaps my objection to them is based in the fact that I feel short-changed by them. I like to get to know fictional characters over the length of 300-400 pages and several hours of reading. If their story can be told over a period of a few pages and read in a few minutes, it just feels incomplete to me.

When George Saunders' latest book of short stories, Tenth of December came out earlier this year, all the critics raved and then swooned. The New York Times Magazine reviewer famously gushed that this would be the best book we would read all year. That was written in January.

Well, now it is August and I felt compelled to read a book that was so highly praised, but - maybe my prejudice is showing here - it was not the best book I have read all year.

There are ten stories in this book and they are a varied lot. Some are funny, some are sad or poignant. Some of dystopian. More than one is science fiction. There is cruelty and ugliness here. And there is gentleness and compassion. The stories are about children and teenagers, middle-aged and old people. It seems that most readers should be able to find at least one or two stories or one or two characters here that she likes.

I found two such stories. Strangely enough, both of them deal with eccentric garden/yard art. As an displayer of some of my own garden art that might be labeled "eccentric," this was an idea that I could connect with.

"The Semplica Girls Diaries" offers a somewhat dystopian, sci fi vision. It deals with an ordinary family of mother, father, and three young children who are lower middle-class and struggling to be seen as "keeping up with the Joneses." They live in a world where poor human beings offer themselves to be used as garden art. In order to impress their neighbors, the parents take four of these individuals and install them as "exhibits" in their front yard. But this appalls their tender-hearted children and the whole scheme turns into an all too predictable fiasco for the family. This story, at 60 pages, is the longest one in the book.

My favorite of all the stories, though, was the shortest one in the book. I found "Sticks," only two pages long, one of the most poignant and affecting tales included. It tells the story of a man who constructed a figure of sticks to decorate his garden and at different times of the year, he dressed his stick figure in different costumes, appropriate for the season. He took great pride in his creation, although his family was somewhat abashed by it. He continued decorating the figure right up until the end of his life. His wife had died and the family had scattered and he was left alone, and his "decorations" at the end were apologies for his real or imagined transgressions. When he died and another young couple bought the house, the first thing they did was to take down the stick figure.

George Saunders is said to be a writer's writer, one that other writers admire. It seems that anytime he publishes anything it is automatically highly acclaimed.

He is obviously an accomplished writer and does have a way with words, but, on the whole, I failed to find or feel a connection with most of these stories. And, again, maybe it was because of my prejudice against short stories.

But then again, I really did quite like that two-page story.