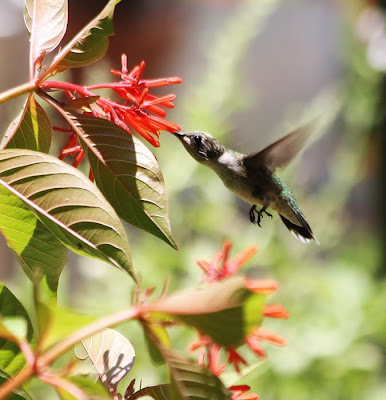 Until recent years, we could be about 99.9% certain that any hummingbird that we saw in our garden would be a Ruby-throat. That representative of its family had a near monopoly on the territory of (roughly) the eastern half of the country.

With the changing climate and the expanding ranges of many birds, that scenario has changed dramatically. Black-chinned and Buff-bellied hummers are now, if not common, at least possible residents in summer. We also get a variety of vagrants through here at various times throughout the year. And, during the winter months, Rufous Hummingbirds are so common as to hardly evince comment anymore.

For the last couple of years, indeed, I have had hummingbirds resident in my yard twelve months of the year. The Ruby-throats show up in late March or early April and linger until November - even sometimes into December.

The Rufous Hummingbirds begin to trickle through in late August. For the last two winters, I have had two Rufous hummers that stayed in my yard through the winter and into the spring, until after the Ruby-throats had begun to return.

I occasionally see Black-chinned hummers here - at least I think I do. They can be very difficult to distinguish from the closely related Ruby-throats. I've not yet seen a Buff-bellied or any of the more exotic hummers in my yard.

Summertime, though, is still Ruby-throat time here. There is a female Ruby-throat who stays here through the summer and nests here. Occasionally, as this summer, there will be a male hanging around also, but once mating is accomplished, he plays no role in hummingbird family affairs. The female does everything: builds the tiny walnut-shell-sized nest, lays two eggs, incubates the eggs, and feeds the young once they hatch. She feeds them on a regurgitated mix of tiny insects and nectar.

Considering the metabolic rate of hummingbirds and the amount of feeding that each bird has to do just to keep itself alive, it seems amazing that one bird is able to do all of the chores related to nesting and raising nestlings. That, of course, is only one of the almost unbelievable things about this amazing bird.

Having a male bird in the yard during the summer has allowed me to see his rather fantastic display by which he attempts to entice the female into mating. First, he would swing back and forth in front of the female several times and then he would fly high into the air and dive at tremendous speed, making a u-shaped turn before he hit the ground. He would then continue to fly high into the air again and repeat that display several times. On the two occasions that I witnessed this performance, the female did not appear to be impressed. But perhaps she was just being coy.

The most fantastic part of the Ruby-throated Hummingbird's life cycle is its migration. The tiny birds may spend the summer as far north as southern Canada, but in late summer, they start heading south again. Their trip will take them into Mexico, Costa Rica, or as far south as Panama. Some seem to fly straight across the Gulf of Mexico, but most probably follow the Texas coast south. When you realize that this fall migration is carried out during the height of the hurricane season, you begin to see what a perilous journey it is.

Then, of course, in the spring, they do the whole thing over again in reverse. 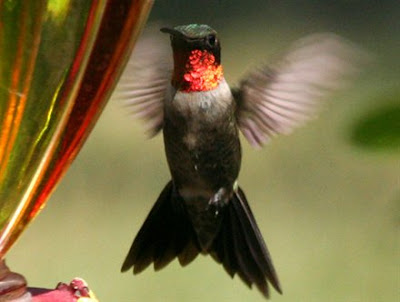