August 18, 2013
Almost forty years ago, a friend of mine introduced me to the writing of a man from Kentucky named Wendell Berry. He thought that, with my interest in Nature, Berry would be a perfect fit for me. He was right.

I have frequently dipped into Berry's writings over the years since then. He is a prolific writer of essays and poems, all of which have at their foundation the idea that people need to live at peace with their environment. As he wrote in 1969, "We have lived our lives by the assumption that what was good for us would be good for the world. We have been wrong. We must change our lives so that it will be possible to live by the contrary assumption, that what is good for the world will be good for us."

Wendell Berry has not only written in support of that assumption; he has lived his life as an example of that assumption. Now, the 79-year-old writer has been recognized for his life's work. He has been named recipient of the prestigious Dayton Literary Peace Prize's lifetime achievement award. The prize is called the Richard C. Holbrooke Distinguished Achievement award, in honor of the late U.S. diplomat who brokered the 1995 Dayton peace accords on Bosnia, and it is meant to recognize literature's ability to promote peace and understanding.

What better choice, then, for a poem to start this week than something by Mr. Berry. In this case, it is what my elder daughter says is her favorite poem. It is a poem of solace for the harried soul.

The peace of wild things

When despair for the world grows in me
and I wake in the night at the least sound
in fear of what my life and my children's lives may be,
I go and lie down where the wood drake
rests in his beauty on the water, and the great heron feeds.
I come into the peace of wild things
who do not tax their lives with forethought
of grief. I come into the presence of still water.
And I feel above me the day-blind stars
waiting with their light. For a time
I rest in the grace of the world, and am free. 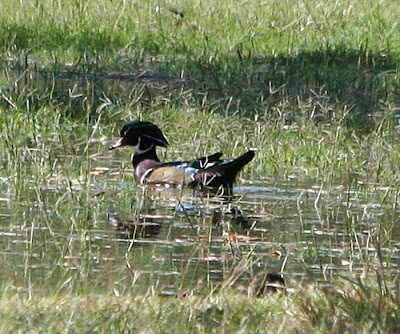 Wood Duck drake free and at peace on the water.
poetry Wendell Berry