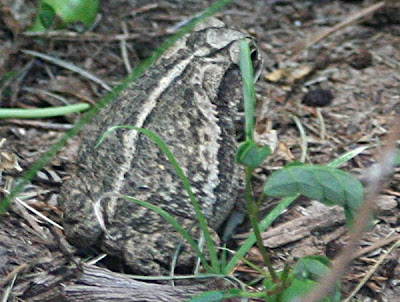 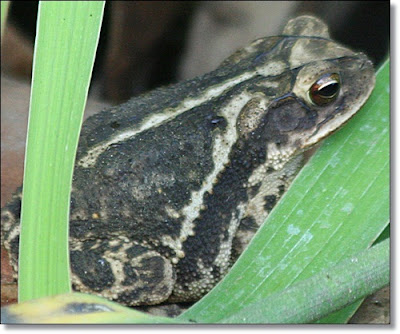 Toads and frogs are facing threats to their existence right around the world today. Habitat loss, pollution, global climate change, and fire ants, to name just a few, have joined the amphibian's traditional enemies - herons and egrets and snakes and other such predators that love to dine on them - as mortal threats. But in my yard this year, both toads and frogs are doing very well indeed. I see them daily as I work in my garden.

The addition of a goldfish pond to my backyard has perhaps aided the amphibians, because they do, of course, live a dual life. They start their lives in water. The eggs hatch into tadpoles which rather quickly develop into true frogs which hop out onto the land to begin their second life.

The toad in the photos is one of Woodhouse's toads and that seems to be the species that is prevalent in my yard. It is highly nocturnal, so even though I encounter them during the day, they really leave their cover and get active at night when they capture large quantities of insects. Toads and their cousin frogs are great partners for the gardener.

There are many myths about toads. The best known one is that handling them causes warts. It grew up, apparently, because the toads themselves are covered in wart-like bumps, but it is just a myth.

It is true, though, that the toad's skin exudes secretions that may include a poison from the paratoid gland. The poison of the toads in our area is not harmful to humans, but it may cause dogs or cats that catch one to froth at the mouth.

Toads are interesting little critters. They are fun to observe and wholly beneficial to the environment. If you are lucky enough to have some of them in your yard, enjoy observing them and know that the best thing you can do for them is leave them alone. That's what they really want and need.
toads