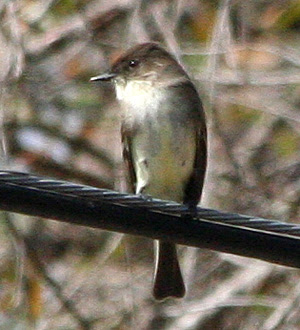 The first of the winter's Eastern Phoebes have arrived. I heard the first ones of the season calling this week. That's always a welcome sound.
*~*~*~*
At last, we are nearing the end of the election season. If Biden should win, it offers the United States the chance to once again join the community of nations in the Paris Accord and pledge to fight climate change.
*~*~*~*
The damage that has been done to the environment by the current administration's "meat cleaver" assault on wilderness areas is almost impossible to overstate.
*~*~*~*
Though many journalists seem to believe otherwise, Joe Biden's climate policy which emphasizes a transition away from the use of fossil fuels is actually quite popular with the public.
*~*~*~*
The current administration is taking action to strip protections from Alaska's Tongass National Forest and allow logging there even though the move is very unpopular with many Alaskans, especially the Native American population.
*~*~*~*
Many birds of the boreal forest including Pine Siskins, Red-breasted, and White-breasted Nuthatches are irrupting into the eastern half of the lower 48 states but there is also a significant irruption taking place from the Rocky Mountains to the Great Plains of birds like jays, chickadees, woodpeckers, and finches.
*~*~*~*
An important tool for preventing future pandemics is simply protecting the natural world and ending the trade in wildlife.
*~*~*~*
The Fish and Wildlife Service is once again attempting to remove gray wolves from the protection of the Endangered Species List. Even though the species has significantly recovered, many scientists believe it is not yet time to discontinue those protections. So, it is back to court once again for the environmentalists trying to keep the protections in place.
*~*~*~*
Meanwhile, the accession of Amy Coney Barrett to the U.S. Supreme Court will likely cement a conservative majority that is willing to give polluting industries freer rein, limit the ability of citizens to sue, and call into question the very basis of the EPA to issue and enforce regulations.
*~*~*~*
As the numbers of right whales continue to fall, it seems that the species may be on the very brink of extinction.
*~*~*~*
A designated marine protection area around the Antarctica Peninsula could go a long way toward protecting Chinstrap and Gentoo Penguins that are being harmed by concentrated fishing for krill, the birds' main source of food.
*~*~*~*
Even though a La Niña climate event is underway, which normally presages a colder and stormier winter in the northern hemisphere, it is expected that 2020 will be one of the hottest years on record.
*~*~*~*
And still more scary climate news: Dust levels are rising in the Great Plains giving rise to fears of another Dust Bowl.
*~*~*~*
More land birds migrate through the eastern part of the United States than the western part and those that migrate through the east travel farther than the western birds. Kenn Kaufman explains why.
*~*~*~*
The Pacific coast off Los Angeles was once a dumping ground for the banned pesticide DDT. Recently, a robot exploring the seafloor there found some of those old dumped containers and it showed them to be leaking.
*~*~*~*
Do you speak the language of plants? Knowing the scientific name of a plant which is in Latin can tell you quite a lot about that plant.
*~*~*~*
Madagascar is the land of lemurs and a privately owned park there called Antohakalava that is twice the size of Central Park is home to three critically endangered lemur species.
*~*~*~*
The president's precious border wall (which Mexico is not paying for) is an ecological disaster for the border area. Vox provides a visual guide.
*~*~*~*
A scientific study of birds of the Amazon has found that nine insect-eating species that live there are in steep decline.
*~*~*~*
A chameleon species that had not been seen in a century has been found alive and well in Madagascar by a team of researchers from Germany and Madagascar.
*~*~*~*
MERMAID (Marine Ecological Research Management AID), which launched last year, is a first of its kind: a free, online-offline platform that allows scientists anywhere in the world to collect, analyze and share field-based coral reef surveys. It offers a way to channel conservation action to save the reefs.
*~*~*~*
A set of ancient footprints from the Pleistocene Era that were recently found in the southwestern United States tell an interesting story of an adult and toddler human walking in an area full of large animals.