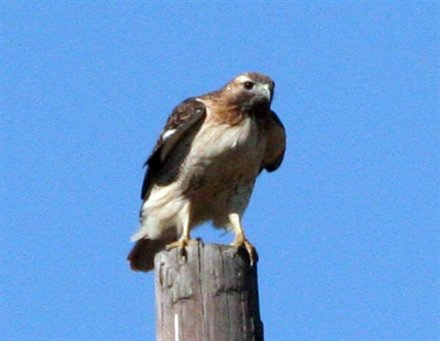 A Red-tailed Hawk views the world from the top of a utility pole, backed by an October blue sky.
*~*~*~*
Winter is the peak season for feeding birds in one's yard. Here are some hints about how to do that more effectively.
*~*~*~*
Earth just recorded its hottest September on record since at least 1880. The year is now on track to possibly become the hottest year on record, breaking the previous record set in 2016.
*~*~*~*
The Pantanal wetland in Brazil is still burning. Roughly a quarter of the ecosystem has been consumed by wildfires that have been exacerbated by climate change.
*~*~*~*
A slow-motion ecological catastrophe is occurring at the Lower Klamath National Wildlife Refuge on the California-Oregon border. A massive outbreak of avian botulism has killed 40,000 birds so far, mostly waterbirds that gather in the refuge is vast numbers during migration.
*~*~*~*
Climate change is causing irreversible shifts in the Asian ecosystem. The Central Asian steppes are being transformed into a desert and perhaps permanently reducing the biodiversity of the region.
*~*~*~*
When a whale collides with a fast-moving ship, it is generally very bad news for the whale. A new technology called Whale Safe aims to reduce such encounters and make the oceans just a bit safer for sea mammals.
*~*~*~*
A study by a group of Harvard researchers has found increased radiation downwind of U.S. hydraulic fracturing drilling sites. The significantly higher radiation levels pose a potential health risk to nearby residents.
*~*~*~* 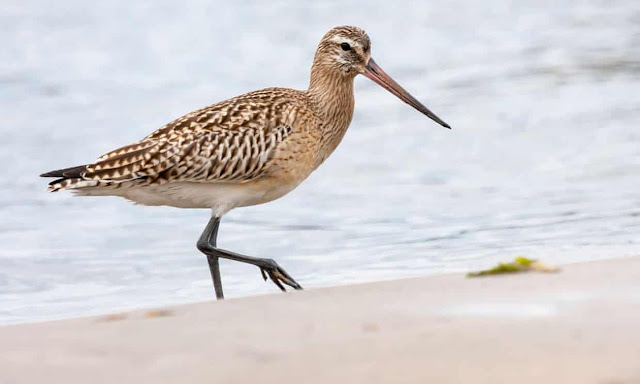 A Bar-tailed Godwit flew 7,500 miles in a non-stop flight from Alaska to New Zealand breaking the previous record for such avian flights.
*~*~*~*
The rapid intensification of hurricanes as they near landfall has been linked to the warming ocean currents that have accompanied climate change.
*~*~*~*
Historically, smalltail shark populations had been among the most abundant of fishes in Brazil, but rampant overfishing over the past 40 years has transformed it into a critically endangered species. It is now perilously close to extinction.
*~*~*~*
The Arctic region is unraveling faster had been predicted and could well be in an irreversible death spiral. Without drastic action to control climate change, it may be too late to save the Arctic as we know it.
*~*~*~*
One of the helicopters making water drops over the huge Creek Fire in California had a close encounter with a Western Screech Owl. The owl actually flew into the cockpit of the copter and sat on the console looking at the crew, seemingly unconcerned. After resting for a few minutes, the bird flew out again.
*~*~*~*
A global review has found that governments are falling far short of protecting enough of the right areas of their ecosystems to protect biodiversity.
*~*~*~*
A mystery regarding the Bearded Vulture that has been causing a stir with its tour of the UK in the past few months has now been solved. A genetic analysis of some of the bird's feathers shows that it is a female bird that was hatched in the wild in the French Alps in 2019.
*~*~*~*
A COVID-19 outbreak at Utah fur farms has killed 10,000 minks, but a state veterinarian says humans are not at risk from the eruption of the virus.
*~*~*~*
Birds with large eyes that are adapted for seeing in the darker parts of forests are more affected by artificial lighting in human-altered landscapes and are less able to compensate for it.
*~*~*~*
The International Energy Agency confirms that solar is now the cheapest electricity in history with technology cheaper than coal and gas in most countries.