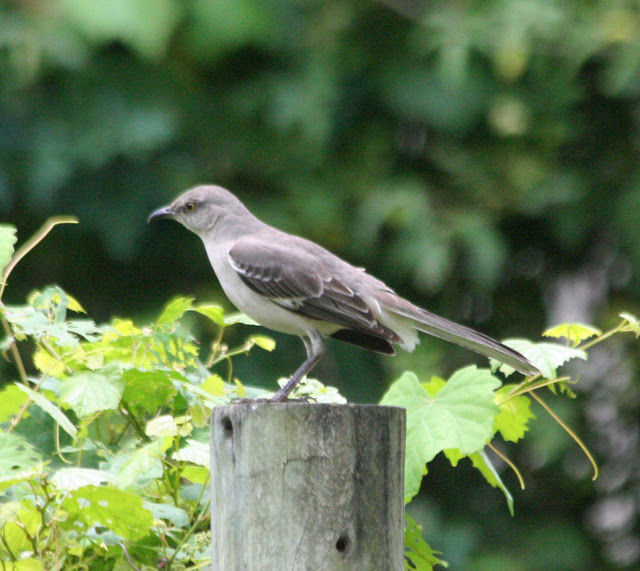 A Northern Mockingbird sits on the post holding up my muscadine grape trellis. Mockingbirds do love those muscadines and they keep a close eye on the vines at this time of year as the grapes begin to ripen.
*~*~*~*
Up to 1500 migrating birds were killed in a single 24-hour period last Friday as they collided with skyscrapers in Philadelphia. The deaths might have been prevented by the simple act of turning off lights at night.
*~*~*~*
The current administration's plans to drill for oil off the Atlantic Coast using seismic blasts that could harm wildlife were opposed by states all along that coast. The battles were fought in courts and the government's permits for allowing that seismic blasting will expire next month. They are not being renewed so it appears the plan is dead at least for now.
*~*~*~*
Exxon, one of the largest corporate emitters of greenhouse gases, has plans to increase its emissions by as much as the output of the entire nation of Greece by 2025, according to an analysis of internal documents reviewed by Bloomberg News.
*~*~*~*
After the Isthmus of Panama emerged from the waves and connected North and South America, animals were able to freely cross between the continents. Today the descendants of those animals are well established in South America, but colonization in North America by animals from the south has been less successful. It is not entirely clear why.
*~*~*~*
A growing body of research confirms that the dangers to bees and other pollinator populations are greater than ever, a veritable "perfect storm" of parasites, pesticides, and other emerging threats. But the same study offers the hope of some solutions to the problems they face.
*~*~*~*
Somehow this doesn't surprise me. It has been revealed that millions of dollars meant for COVID-19 aid went to companies with histories of violating environmental rules.
*~*~*~*
Now that a federal judge has ruled that the head of the Bureau of Land Management had been serving illegally, efforts are underway across the West to overturn decisions he had made.
*~*~*~*
The Black Rail is a mysterious bird of the Louisiana marshes. It has now been granted protected status under the Endangered Species Act which may help boost the efforts to conserve the areas where the small and fragile population of the birds is known to thrive.
*~*~*~*
A study has recently confirmed the value of peat bogs in the effort to slow or stop further warming of the planet. Conserving peatlands, which are carbon sinks, could help the world achieve the limit of 2 degrees Celsius of postindustrial warming that is part of the 2015 Paris Agreement.
*~*~*~*
There are many reasons to try to save the Amazon rainforest, but one of them is that it may contain the ingredients of medicines yet undiscovered that could vanquish illnesses that stalk humankind.
*~*~*~*
A loss of biodiversity represents a potential threat to national security. For example, a pandemic that hit cultivated crops could be devastating to our food supply and create as severe a threat as our present pandemic. Scientists are studying the lowly potato in search of ways to guard against such a threat.
*~*~*~*
Conservationists have reintroduced Tasmanian devils to the Australian mainland for the first time in 3,000 years. It is hoped the predators will assist in the fight against invasive species.
*~*~*~*
A study says that the potential for the natural regrowth of forests that have been damaged has actually been underestimated and allowing them to regrow naturally could be a better option than humans replanting them.
*~*~*~*
Problems that used to be addressed separately are now merging into what amounts to one very large climate crisis. There are many parts to it but they are all related.
*~*~*~*
The gigantic Ozark hellbender salamander is in trouble in the wild, but a dedicated team at the St. Louis Zoo is giving the critter a hand. Since 2011, their parent hellbenders have laid 6,500 eggs that have resulted in the birth of 5,100 tiny hellbender hatchlings that have been or will be reintroduced into the wild.
*~*~*~*
The hunt is on in Washington for a colony of the so-called "murder hornets." It's feared these insects might be about to enter the phase where they will decimate hives of honeybees and conservationists hope to find and destroy them before that happens.
*~*~*~*
The viruses that affect bats had been of interest only to specialists and devoted conservationists until our current pandemic put the spotlight on the animals as the apparent original source of the novel coronavirus. Now the study of those viruses and the bats' immunity to them has attained greater urgency.
*~*~*~*
The Fish and Wildlife Service has decided that wolverines do not require the protection of the Endangered Species Act. Conservationists disagree and say that climate change threatens the animals' habitat in the lower 48 states and that they should be protected. They vow to sue to make it happen.
weekly roundup