Luster by Raven Leilani: A review 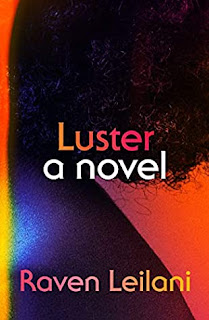 When we first meet Edie she is an assistant book editor at a publishing house in New York. She is a 23-year-old Black woman whose main focus in regard to her workplace seems to be sleeping with as many of her male colleagues as possible rather than actually engaging in doing the work. Not that these sexual adventures appear to provide her with any pleasure; instead it is evident that she seeks them out as a way of escaping from self.

It is interesting to read the descriptions of corporate life as seen through Edie's eyes. At one point, we get her take on the "diversity" offerings of her publishing house: These include "a slave narrative about a mixed-race house girl fighting for a piece of her father's estate; a slave narrative about a runaway's friendship with the white schoolteacher who selflessly teachers her how to read; a slave narrative about a tragic mulatto who raises the dead with her magic chitlin pies; a domestic drama about a Black maid who, like Schrodinger's cat, is both alive and dead." I believe I discern a pattern here.

When she is finally called into the Human Resources office and fired for sexual impropriety Edie doesn't even bother to ask for an explanation or to protest. She packs up her office and goes.

Not only has she been engaging in serial sexual encounters with multiple partners from her workplace but she is infatuated with Eric who is a much older white man in an open marriage with his wife, Rebecca. This started with an online courtship and progressed not as rapidly as Edie would have liked to a physical relationship. On one occasion, Eric even took her to his home for a romp while his wife and daughter were out.

After Edie is fired, she manages for a while with spot delivery jobs. She has a roommate to help with expenses. But then the roommate moves out and Edie still hasn't found another job. Soon she is drowning in debt.

In this state, she goes to her lover Eric's house; it's not really clear why. She enters the bedroom where she and Eric had sex and is going through his wife's closet when the said wife comes home and discovers her there. Rebecca accepts her presence calmly. She obviously knows who Edie is. In fact, she invites Edie to move into their guest room.

Her interest in Edie becomes apparent when we learn that she and Eric have a 12-year-old adopted daughter, Akila, who is Black. Akila is one of very few Black children in a White suburb and she is lonely and isolated. Rebecca seems to see Edie as a possible friend and counselor for Akila. Eric is out of the country on a business trip and the three females settle down together in a kind of spiky relationship.

Akila is not particularly accepting of any counsel from Edie, but eventually, she does accept her help with her hair. Thus, we get what for me were intriguing conversations and narratives about the care of Black hair. It is fragile in a way that the hair of White people is not and it requires handling by someone who understands its properties.

In fact, hair is an important plot point in the book. It seems to be one of the first things that Edie notices about other women. And not only does she spend time teaching Akila about the products that she needs to properly care for her hair, at one point, she also carefully dyes Rebecca's hair in response to her request. After Eric returns home, these relationships continue for a while, even as she and Eric resume their sexual adventures.

The narrative proceeds in a fairly linear fashion with the exception that we do get Edie's backstory of her upbringing which includes her father's philandering and her mother's addiction. We get to know a lot about Edie, maybe even too much, but mostly as a list of symptoms and actions rather than a fully-formed character. I freely admit I didn't like her much and I couldn't work up any empathy for her. Is that because of our generational divide or our differences in background? I couldn't say. I can only say that I fully understood the other characters' impatience with Edie as she continues her transgressions against society's norms with little consciousness of the damage that she does to others or to herself.

This is Raven Leilani's debut novel and it was highly touted by critics for its boldness and sexual frankness. It does show promise but a lot of the writing seemed repetitive and flat to me. The pace of the plot is brisk and the atmosphere of the writing is pulpy. The greatest weakness, in my opinion, was a failure to develop the characters beyond their surface appearance and actions. I would rate it at three-and-a-half stars, generously bumped up to four.