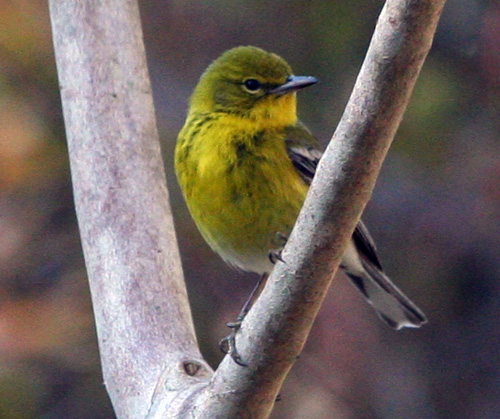 One of the winter visitors whose arrival we always look forward to is the Yellow-rumped Warbler Pine Warbler. I don't think they've arrived yet this year. This picture was taken in a previous year.
*~*~*~*
Like much else of our society, environmentalism has some of its roots firmly based in racism. This article explains how we might correct that.
*~*~*~*
The unexplained deaths of hundreds of thousands of birds in the Southwest this late summer and fall still remain a mystery but are thought to be somehow related to the massive wildfires that afflicted the region. Scientists are attempting to get to the root cause and explain the possible connection.
*~*~*~*
The election is just a week and a half away and environmentalism is very much a part of the decisions that voters will make. The New York Times explains.
*~*~*~*
We know something of the damage that plastic waste in the ocean can do to the fish and mammals that live there but it can also damage bacteria that are essential to the oxygen cycle, thus making it more difficult for us to simply breathe.
*~*~*~*
Older male chimpanzees are known to form close reciprocal relationships with a few good friends with whom they interact. No grumpy old men here!
*~*~*~*
An interesting find this week from the world of archaeology: The image of a huge cat was found among the Nazca lines in Peru. This joins such previously found images as hummingbirds, monkeys, and an orca. The feline line drawing has been dated to 200 - 100 BCE.
*~*~*~*
The Tawny Frogmouth is one of Australia's most beloved birds and they are found throughout that country. Here are some interesting facts about the birds.
*~*~*~*
As sea level rises, king tides are becoming a big problem for communities along the East Coast. Floods that used to come only during storms now can happen even on sunny days.
*~*~*~*
Ethiopia is facing a plague of biblical proportions from desert locusts. Swarms of the insects have damaged 200,000 hectares of crops in a region that was already struggling with food insecurity.
*~*~*~*
Tardigrades are tiny organisms less than 1 millimeter in length but they have the knack for surviving in the extreme environment of the Arctic. The creatures, nicknamed water bears or moss piglets, have an uncertain future in our world with its changing climate.
*~*~*~*
An uncounted number of North American shrubs, trees, herbs, and other plants have gone extinct since Europeans came to the continent. Here are five that botanists have documented.
*~*~*~*
Corvids are well known for their intelligence and ability to solve problems. They are perhaps less known for another of their capabilities: generosity and empathy. Their social life is a major factor in determining to what degree they possess these capabilities. Those that raise their offspring cooperatively are more likely to engage in actions that benefit the entire community.
*~*~*~*
Countries in Europe that are making positive efforts to control global warming are looking to America's upcoming election with some trepidation and hoping that the new year once again brings them an ally in these efforts.
*~*~*~*
The description of the Amboteryx as a flying dinosaur is a bit generous. Based on an analysis of its fossils, it appears to have been rather spastic and flight-challenged and likely was only able to hurtle and glide from tree to tree.
*~*~*~*
A shocking number of birds are killed each year by colliding with buildings. Identifying them is just the first step in understanding the problem. Here is the story of a researcher's efforts to understand and find a solution to the problem.
*~*~*~*
An attempt to reintroduce the 'Alala, or Hawaiian Crow, to the wild has failed in its first effort. Thirty of the birds had initially been released but they have not had an acceptable rate of survival. Finally, the five remaining birds were recaptured and brought back in order to prevent the extinction of the species. Further study is needed to try to aid the birds' survival in the wild.
*~*~*~*
Finally, Margaret Renkl makes a plea for voters to consider the health of the planet when they go to mark their ballots.