The Searcher by Tana French: A review 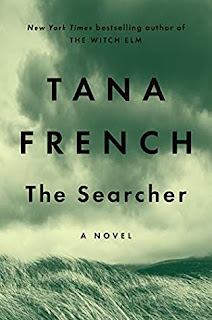 Critics and readers in general often assign Tana French to the niche of crime fiction writers, but that really undervalues her art. Her novels could be more accurately described as thoughtful literary fiction in which a crime takes place. That has never been more true than in her latest novel, The Searcher.
Several critics have noted the debt this particular novel owes to the classic Western movies, particularly collaborations between John Ford and John Wayne. The very title of the book is a nod to the Ford/Wayne movie "The Searchers." But there may be just a touch of "The Quiet Man" here, too, in the American who moved to western Ireland and became a part of the local scene in a small village.
The American here is Cal Hooper, a Chicago cop for twenty-five years. Cal has just endured a rancorous divorce and his adult daughter has moved to Seattle. There seems to be nothing keeping him in Chicago except the job. A job from which he is eligible to retire. And that's exactly what he does. He invests in a fixer-upper cottage in a bucolic Irish village and moves there to set about repairing and upgrading it. It seems the perfect escape for the quiet life that he envisions. He gets acquainted with his neighbors, makes himself known at the local pub, and generally goes about settling into his new life.
Then his cop sense begins to twitch. He begins to suspect that someone is watching him, even to the point of looking in his windows at night. He sets a trap by spreading smooth soil under his windows to capture footprints of the suspected interloper. And sure enough, in the morning, there they are - proof that someone was spying on him.
He stays alert over the next several days and finally, his stalker shows up.  It's a kid - a thirteen-year-old named Trey. Trey comes from a hardscrabble family living on the mountain adjacent to Cal's place. There are six kids in the family and a mother trying to keep them all fed and together. The father is nowhere to be found. Some months earlier, the oldest child, a boy named Brendan, had disappeared. No one has heard from him since and there seems no clue as to where he has gone or if he is still alive. Trey thinks he was kidnapped and wants Cal to find out what happened.
Cal doesn't want to get involved, but once again that cop sense kicks in and he feels a need to solve this mystery. Also, he's becoming attached to Trey who helps him with chores around his place. His conversations with the child inevitably lead him to start asking questions. And that's when he begins to suspect that there are hidden layers to life in this quiet village and that there are dangerous secrets that he would be wise not to disturb. Cal's neighbor, Mart, who had taken the American under his wing and eased his entry to the village delivers an oblique warning that Cal is about to poke a hornet's nest. The warning doesn't take. As Cal goes about asking his inconvenient questions, the reader has a growing sense of dread that this is not going to end well for him or for Trey.
French builds her plot ever so slowly and carefully with full attention paid to the beauty of the Irish landscape and to the insularity of village life. She makes us feel Cal's loneliness as he longs for his daughter, feeling that perhaps something is wrong in her life but unable to discover what it might be or do anything about it. He even misses being able to discuss things with his ex, Donna. And he begins to suspect that his neighbors are not to be fully trusted.
Some critics have complained that this book is very different from French's Dublin Murder Squad series or her most recent book, The Witch Elm, and they seem disappointed with it for that reason. To which I reply, yes, it is different and why on Earth would you require a talented writer to write variations on the same story every time out? This is a story in which right and wrong are not simple and they are definitely not black and white. These characters' lives are filled with gray areas and morality is a complex issue. It is a narrative that gives the reader much to consider, the kind of thing that one would expect of the best literary fiction.
I liked Cal Hooper quite a lot. Maybe I even fell in love with him a little bit. And Trey is a marvelous and ambiguous character. I did not want my time with them to end. This rates right up there with my favorite French novels. Her artistry and creativity are in full flower.
My rating: 5 of 5 stars
books reading reviews Tana French