Abide With Me by Elizabeth Strout: A review 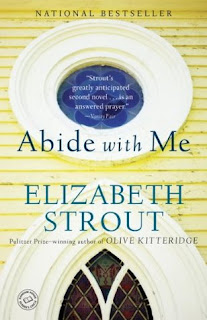 Elizabeth Strout's second novel, Abide with Me, was published in 2006. It tells the story of Tyler Caskey, a young minister in the fictional town of West Annett, Maine. His wife died about a year before, leaving him with two small daughters. The younger of the two, Jeannie who is still a baby, is being cared for by Tyler's mother in her home. The older child, Katherine, is around four years old when we meet her and lives with her father but has obviously been traumatized by her mother's death and is very antisocial both at school and at home. Tyler is thus dealing with his own grief and sense of loss as well as trying to be a responsible father to two daughters and meet his responsibilities at the church. In other words, he has his hands full.
As Tyler struggles, rumors spread in the community about Katherine's problems and of a suspected affair between Tyler and his housekeeper, Connie Hatch. It all starts in the church's Ladies' Aide Society which seems to have as its main purpose to serve as a clearance center for all the juicy gossip of the community. The members of the group hover over Tyler which only serves to increase the pressure on him. Soon enough his grief begins to turn to anger and his depression grows making it extremely problematic whether he can minister to his congregation and be the parent that his troubled daughter needs.
The time is the 1950s and the clouds of the Cold War hang over everything. Meanwhile, talk of Freud's theories about hidden sexual motivations driving human nature is all the latest rage. Amid these unsettled times in society and the challenges of his personal life, Tyler tries to cling to his faith and he takes comfort in the writing of Dietrich Bonhoeffer and his experiences of attempting to transform a faith community in Germany in World War II.
Strout details in a straightforward way Tyler's attempts to rise above all the gossip and the petty concerns of his church board and congregation and to remain true to the calling that led him to become a minister in the first place. At times this becomes a thoroughly depressing story but ultimately there are breakthroughs both on the personal level and with the congregation that speak to the resilience of the human spirit and the ability to overcome adversity.
The writer's characterizations are completely believable. I think we have probably all known people like Tyler and indeed like some of the bitchier gossipers in his congregation. Tyler is on many levels endearing, if naive. In his own way, he strives to be perfect but falls short, as we all must.
The book's climax leaves the reader with some hope that things will eventually work out for the rebuilt Caskey family. But it is in no way a neat and tidy conclusion and we have to acknowledge that things could actually go either way from here. Tyler is a good guy and we hope for the best for him.
My rating: 4 of 5 stars
2022 4-star reads 2022 books Elizabeth Strout