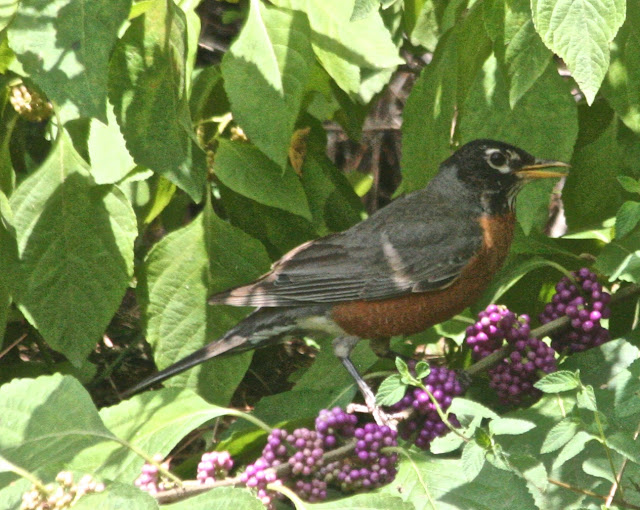 American Robins do love their beautyberries and there are plenty for them in my backyard.
*~*~*~*
Some rare good news for gray wolves this week: A federal judge has overturned the decision by the previous administration (which had also been defended by the Biden administration) to take the wolves off the Endangered Species List, thus removing them from the protection from being hunted. They will now be protected in most of the lower 48 states, although apparently, that protection will not extend to Montana and Idaho.
*~*~*~*
The National Butterfly Center in Mission, Texas remains closed due to threats from right-wingers.
*~*~*~*
A saltwater crocodile in Indonesia that had somehow managed to get a motorbike tire wrapped around its neck has finally been freed after five years of carrying the tire. The reptile was trapped by a local bird seller and dozens of locals helped to drag the animal to where the tire could be cut from its neck. Then it was released back to the wild.
*~*~*~* 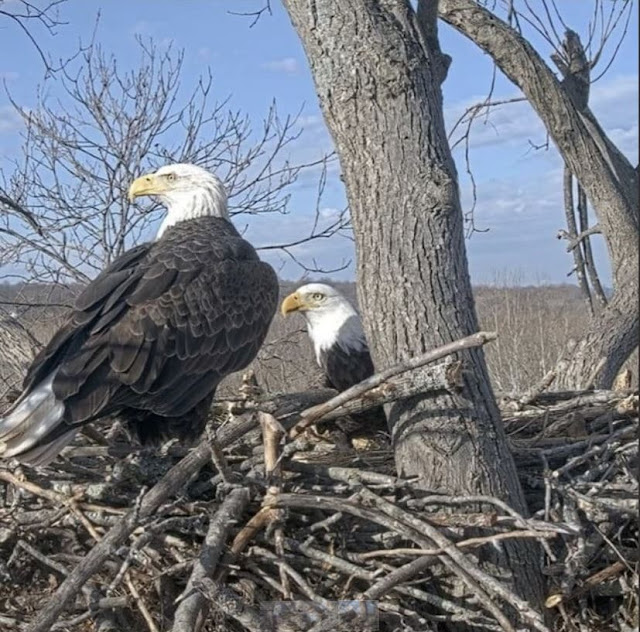 These two Bald Eagles nesting in Leesburg, Virginia now have names thanks to the children in the area. About 9,000 students in Loudoun County public schools entered a contest to give the birds names and what they came up with were Martin and Rosa for Martin Luther King, Jr. and Rosa Parks. The birds have a lot to live up to. There are two eggs in their nest which are expected to hatch in early March.
*~*~*~* 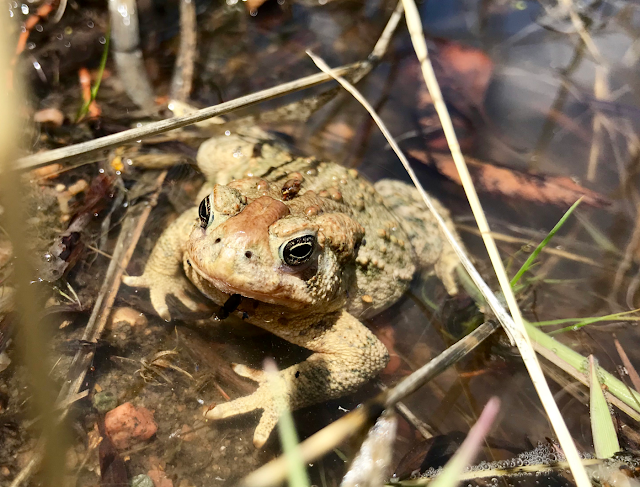 The Wyoming toad was listed as endangered in 1984 and shortly thereafter was considered extinct in the wild. But reports of its demise were premature. Wyoming toad lives!
*~*~*~*
This seems like a sad burden to inflict on a poor, defenseless worm. Scientists have named a newly discovered flatworm after the coronavirus. Its official name is Humbertium covidum and it has been found in France and Italy but likely lives in other areas as well.
*~*~*~*
The construction of dams can endanger species of fish because they change the temperature of the water in rivers which may make it uninhabitable for the fish.
*~*~*~*
Wild Turkeys are big birds and groups of them can be very aggressive especially around nesting season. That seems to be what is happening in Mountain View, California now. They've become such a nuisance that plans are being made to trap and relocate them to a less populated area.
*~*~*~*
A loophole in protections has allowed more than 400 square miles of Amazon rainforest to be felled in order to expand soya-growing farms in the state of Mato Grosso in Brazil.
*~*~*~*
Here's a story about how the magic of birds can captivate onlookers.
*~*~*~*
Biologists are concerned that white-tailed deer could become a reservoir for coronavirus, posing an ongoing threat to both animals and humans.
*~*~*~*
The worst drought to hit the area in a decade is creating a humanitarian crisis in Somalia as millions are going hungry.
*~*~*~*
The Rough-legged Hawk is a strikingly handsome bird and it ranges over a good portion of North America.
*~*~*~*
Trust Canada to come up with a wonderful idea! The benefits to one's mental health of time spent Nature are well documented and now Canadian doctors can prescribe a pass for national parks for the patients whom they deem are in need of such time.
*~*~*~*
Mountain glaciers are melting faster than ever because of climate change and in some areas, this is straining the freshwater supply.
*~*~*~*
Chimpanzees have been observed catching insects and applying them to wounds on themselves or other chimps. They do not eat insects but they are definitely applying them to wounds. Is this a form of chimp medicine? Scientists believe that may be just what it is.
*~*~*~* 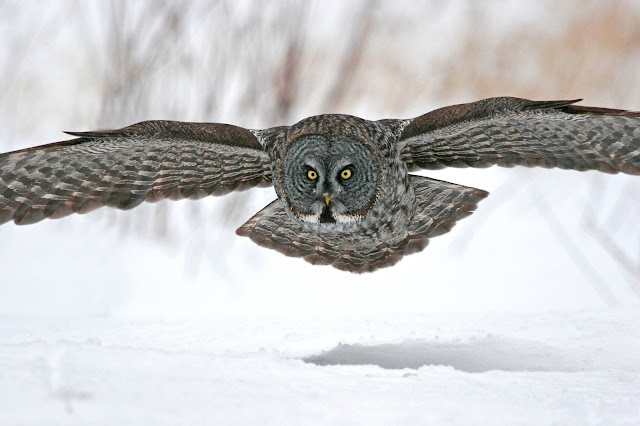 It's just possible that winter may be the very best time to observe Great Gray Owls like this one, as well as many other kinds of wildlife.
*~*~*~*
The experience of extreme weather can have devastating effects on animals even if they survive. Scientists are finding that rhesus monkeys who lived through a hurricane showed signs of premature aging.
*~*~*~*
A Texas-based group called Re:Wild has drawn up a list of the 25 most wanted species as part of its quest to find species that have been lost to science and that may be extinct.
*~*~*~*
Betty, the National Zoo's oldest Flamingo has died at the age of 67. Betty had one chick of her own and fostered many others over the years. The average life span of Flamingos in captivity is 27 years, so she was indeed a remarkable bird.
*~*~*~*
Grotte Mandrin, a rock shelter in France, evidently sheltered both Neanderthals and Homo sapiens alternately over a period of some 50,000 years.
*~*~*~*
Insects are disappearing from Nature and this is very bad news not only for insects but for all the rest of us. They are after all an integral link in the food chain. What happens if that chain is broken?
*~*~*~*
Rover, the Bald Eagle, was banded as a chick in New Haven, Connecticut on May 11, 2018. And now Rover has "roved" to New York's Central Park and has made himself quite at home there. If he can make it there, he can make it anywhere.
*~*~*~*
The birds of Hawaii are unique from those of the mainland. You can learn about some of them here.