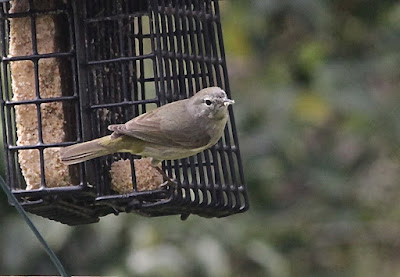 An Orange-crowned Warbler enjoying a meal of suet.
*~*~*~*
The National Butterfly Center on the Texas/Mexico border in Mission, Texas, has announced that it will be closed to the public for the foreseeable future as a result of harassment from right-wingers. The center, which is privately owned, has been the focus of conservative conspiracy theories and political conflict in recent years as they fought against the former president's plan to build a wall through their land.
*~*~*~*
The Biden administration is reinstating the mercury pollution rules that were gutted by the previous administration. Mercury is released by coal-burning power plants and it is a powerful neurotoxin that has been linked to developmental damage in children.
*~*~*~*
New research has confirmed that extreme heat in the world's oceans passed the point of no return in 2014 and is now the new normal. It is a "normal" in which many species of life endemic to oceans cannot survive.
*~*~*~*
Remember the Mexican wolf nicknamed Mr. Goodbar who spent days trying to find a way through the wall which our previous president built along a section of our border? Well, some fool has shot him. He was shot in his right hind leg and although he will survive, all or part of the leg will have to be amputated. Investigators are seeking the guilty shooter.
*~*~*~*
February 2 was, of course, Groundhog Day, the day when these secretive animals briefly emerge from the shadows. Little is known about groundhogs' social life and researchers are aiming to change that.
*~*~*~*
An island in the Russian Arctic used to be home to a meteorological station but has since been abandoned. Abandoned by humans that is. The polar bears have moved in and now make use of the human structures left behind. 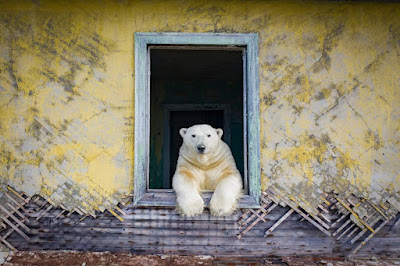 A polar bear looks out a window of one of the buildings on Kolyuchin Island in the Chukchi Sea.
*~*~*~*
2021 saw the emergence of the periodical cicadas, the insects that spend most of their lives underground, emerging into the light after 17 years. Scientists are now studying what was learned from them and looking toward the next emergence in 2038
*~*~*~*
Judges who hear suits regarding offshore oil drilling leases are increasingly requiring that the government take the effects of climate change into consideration before approving those leases.
*~*~*~*
Crows are exceptionally clever birds and a city in Sweden is taking advantage of that. They have trained the crows to pick up cigarette butts on streets and squares. They work for peanuts and are much more efficient than human trash collectors.
*~*~*~*
Jonathan the tortoise has been designated as the oldest land animal in the world. He is estimated to be 190 years old, although he may actually be older.
*~*~*~*
Montana wildlife officials have responded to widespread criticism regarding their wolf hunts by shutting down the hunting in a portion of the state around Yellowstone National Park. Twenty-three of the Yellowstone wolves had been killed.
*~*~*~*
A global tree count by thousands of researchers who used World War II codebreaking techniques developed at Bletchley Park has estimated that there are 73,300 species of trees on Earth. The estimate included 9,000 species yet to be discovered.
*~*~*~*
San Franciscans are very tolerant of wildlife and live amicably side by side with everything from snakes and coyotes to mountain lions. But many are drawing the line at feral hogs which have overrun some neighborhoods and are very destructive. They want them gone, the sooner the better.
*~*~*~*
Hours of heavy rainfall in Ecuador earlier this week have caused floods and landslides that have killed at least 24 in Quito and injured many others.
*~*~*~*
The Texas Commission on Environmental Quality is poorly named; it seems not very concerned about environmental quality. They admit that they have repeated gaps in their monitoring of industrial pollution in the first days following a natural disaster.
*~*~*~*
Volcanism that occurred on Earth some 200 million years ago ripped apart the supercontinent of Pangea and contributed to the extinction of about a quarter of life on the planet during the event known as the end-Triassic mass extinction.
*~*~*~*
Peacocks are quite magnificent birds but when you've got packs of them running around your city they can be a problem, as Miami has discovered. They are big birds and can be quite destructive, plus they poop a lot and are not concerned about where they do it.
*~*~*~*
Do you have a bird feeder in your backyard? Then you might consider being a part of Project FeederWatch and counting your feathered visitors for science.
*~*~*~*
Iceland is one of only three countries that continue to hunt whales commercially, but they are ending that practice in 2024, leaving only Norway and Japan as commercial whaling countries.
*~*~*~*
Methane-detecting satellites are giving researchers a better idea of where methane emissions are coming from around the world. The information may help to find ways to crack down on the release of massive amounts of this climate pollutant.
*~*~*~*
Climate change has had a tremendous impact on the state of Washington over the past year, causing many deaths and substantial damage. The government of the state is considering what changes in laws may be appropriate to help people cope.
*~*~*~*
Earth's sixth mass extinction is underway and scientists have estimated that hundreds of land animals could go extinct in the next 20 years.
*~*~*~*
A same-sex couple of two Humboldt Penguins at the Rosamund Gifford Zoo in Syracuse, New York adopted an egg during the breeding season and are now foster parents to a newly hatched fuzzy-haired chick. Zoo officials say the two are doing a great job of caring for the baby.
*~*~*~*
Finally, a mischievous New Zealand parrot called a Kea stole a GoPro camera from a couple and in the process filmed its flight over remote Fiordland.
weekly roundup