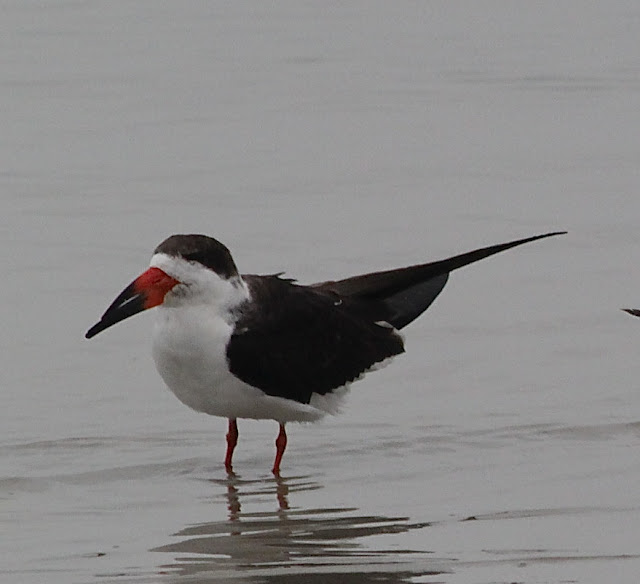 Black Skimmer resting in the Gulf Coast waters.
*~*~*~*
It's the weekend of the annual Great Backyard Bird Count. This is the count's twenty-fifth year. Are you counting and if not, why not? Anyone can participate. No particular expertise is required.
*~*~*~*
More people along the U.S. coastline are being exposed to rising sea levels where the levels are rising faster than the global average. It is expected that they will rise as much as one foot within the next thirty years.
*~*~*~*
A convergence of dangerous weather conditions exacerbated by the climate crisis will expose southern California to an increased threat of wildfires over the coming decades, according to a new study.
*~*~*~*
One thing that might increase the risk of wildfires is the megadrought that has ravaged the West for the last two decades. A new study states that this is the most extreme drought for that area in at least 1200 years and human-caused climate change is a significant driver of the conditions.
*~*~*~*
Some areas experience drought while others have devastating floods. That has been the case this week in Brazil where historic rains and mudslides have killed at least 117.
*~*~*~*
Almost half (46%) of the Bald Eagles that were sampled from California to Florida have shown harmful levels of toxic lead in their bones.
*~*~*~*
A new study has found that the countries of the world are spending at least $1.8 trillion a year on subsidies that are driving the extinction of wildlife and contributing to a rise in global warming. Humanity is thus financing its own extinction.
*~*~*~*
Climate change in the Arctic is causing melting glaciers, thinning sea ice, and thawing massive swaths of permafrost, thus releasing more methane, a gas that heats the planet eighty times more than CO2.
*~*~*~*
One way that we can protect the only planet on which we have to live is to protect its trees that help produce the oxygen which we must have.
*~*~*~*
Africa contains nearly half of the world's gold and one-third of all its minerals. Here is a map that shows where they are found.
*~*~*~*
The progress of global warming can be seen in the dramatic spread of native plants over Antarctica during the past decade. The fragile polar ecosystem is changing and that is not a good thing.
*~*~*~*
The Mayan civilization was the first in the Americas to have widespread use of writing and use of calendars. Because of that, quite a bit is known about them and it seems that climate change may have contributed to their downfall. Is there a lesson there for us?
*~*~*~*
Gray wolves have regained some protection of law but it is not absolute.
*~*~*~*
And speaking of protected wildlife, Los Angeles loves its "Brad Pitt of mountain lions," Griffith Park's most famous feline.
*~*~*~*
The iconic wildlife of Australia is its koalas but habitat loss, drought, and wildfires in 2019 and 2020 have contributed to a decline in their numbers. Now they have been given endangered species status.
*~*~*~*
From the world of archaeology comes this six-inch tall figurine, possibly a part of an early Scandinavian weight system.
*~*~*~*
Tiny vaquita porpoises are critically endangered. There may be fewer than ten of them left. How can they possibly be saved? Well, scientists are giving it their best shot.
*~*~*~*
To save the planet, it is imperative that the world's forests be saved. But climate change is already having a serious impact on the world's boreal forests.
*~*~*~*
A U.N. environmental report published this week states that pollution is causing more deaths than COVID-19. Immediate and ambitious action is needed to ban some toxic chemicals.
*~*~*~*
The blue oak woodlands of California are being stressed to the point of extinction by changes to the environmental conditions in which they live.
*~*~*~*
Have you ever witnessed a lizard dropping its tail? I have and it is quite a dramatic sight. In the instance I am remembering, the lizard in question was under attack by a hen, and all of a sudden its tail fell off and continued to wriggle and was quickly gobbled up by the hen while the lizard made its escape. Sacrificing an appendage, known as autotomy, is a common defense among several species in addition to lizards.