Amy and Isabelle by Elizabeth Strout: A review 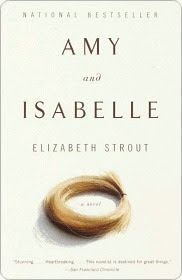 This was Elizabeth Strout's debut novel, published in 1998. In it, she explores the fraught relationship between a single mother and her teenage daughter in the mill town of Shirley Falls. Isabelle, the mother, works in the office of the mill, as secretary to the boss, Avery Clark. Clark is married but Isabelle harbors some forlorn hope of establishing a romantic relationship with him. It's been many years since she had such a relationship. The other employees in the office see Isabelle as aloof and not "one of the girls."
Isabelle's relationship with her daughter, Amy, has always been a good one until Amy hits her teenage years. Then she begins to be critical and disdainful of her mother. When she is sixteen, her math teacher has a health crisis and is replaced by a substitute, Mr. Robertson. Robertson often singles Amy out in class and because of her beautiful golden hair tells her that she looks like a poet. Amy is entranced and develops a huge crush on the man. He is not unaware of her feelings and takes advantage of them to begin grooming her for a relationship. He starts driving her home from school and soon progresses to kissing her goodbye.
The Amy and Robertson relationship takes its expected course and one day while they are parked in a car on an out of the way lane, they are discovered by Isabelle's boss. He reports this to Isabelle with a great deal of embarrassment and she confronts Robertson and threatens to report him to the police since her daughter is underage. When she returns home, she cuts off Amy's glorious hair in a fit of rage. The rift between them seems complete.
During the summer, while one of the women at Isabelle's office is on medical leave, her boss agrees to hire Amy as a replacement for the summer. They have to at least pretend to get along to keep up appearances at the office, but all of the events of the past months take their toll and Isabelle begins to reflect on the circumstances of Amy's birth. We learn that she, as a teenager, was also groomed by a man who had been a friend of her deceased father and she became pregnant by him which derailed her plans for college and, in fact, all her plans for her life. Now, in her loneliness, she begins to reach out to her fellow employees and to develop bonds with them.
I think anyone who has ever been a daughter or a mother of daughters can identify with some of the stresses of Isabelle's relationship with her teenage daughter. It is seldom easy even under the best of circumstances and being a single mother with no family and few friends to support her hardly qualifies as the best of circumstances.
In this her first novel, the qualities that have made Elizabeth Strout such a successful writer are on full display. Her writing shows a wisdom about and an empathy for the human condition. She seems to have a deep affection for all of her characters and to take pleasure in making them known to us. She writes about ordinary people in their everyday lives and makes us empathize with them and hope that they will somehow find that sought for happily ever after future. This was a sterling beginning to her career as a published writer of fiction and nothing that she has published since has tarnished that sterling promise.
My rating: 5 of 5 stars
2022 5-star reads 2022 books Elizabeth Strout