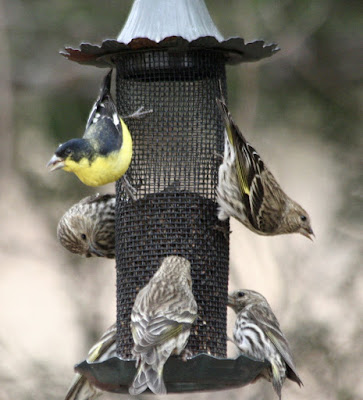 A Lesser Goldfinch joins Pine Siskins at a feeder station in Davis Mountains State Park in West Texas.
*~*~*~*
La Niña has really done a number on our typically mild winter in Southeast Texas. We got cold in December and it has pretty much stayed cold since. Usually, we have a few days in there where we have to have the air conditioner on. Not this winter! The next few days are expected to be brutally cold and forecasters are saying we could get into single digits Monday night and Tuesday morning. We have lived here for thirty-three years and I've never seen single digits before. Sadly, I expect to lose quite a few plants in my garden. There's just no way I can protect them all and the garden isn't planned around weather this cold.
*~*~*~*
The annual Great Backyard Bird Count is happening this weekend. Citizen scientists around the world are observing and counting birds and reporting their findings to the website. I spent some time today watching the feeder in my front yard and counted thirteen species - twelve kinds of songbirds and one Cooper's Hawk attempting to feed on them. You can participate, too. The more the merrier!
*~*~*~*
Researchers studying the impact of conservation actions since the landmark 1992 Rio Earth Summit say that at least twenty-one species of birds and seven mammals have been saved from extinction through direct human intervention. Let it never be said that conservation actions are not worth taking.
*~*~*~*
Research has found that fossil fuels have caused at least 8.7 million deaths in the single year of 2018. Pollution from power plants, vehicles, and other sources was responsible for one in five of all deaths in that year according to a detailed analysis.
*~*~*~*
The New York Times has a simulation showing how the movement of Earth's tectonic plates has brought about the current configuration of the continents over the last billion years.
*~*~*~*
Activists from the Navajo Nation are pursuing an equitable energy economy for the Nation from the rise and fall of the coal economy.
*~*~*~*
The world's biggest owl is the Blakiston's Fish-owl, endemic to Russia and parts of Asia. The owl's population is declining due to habitat loss and climate change but it will not go gentle into that good night if the dedicated conservationists trying to save it have their way.
*~*~*~*
Costa Rica has a proud history of protecting its natural heritage and it is putting protection of its mangroves at the forefront of its commitments to the Paris accord on climate change.
*~*~*~*
A Republican congressman from Idaho has laid out a framework for the removal of four dams from the Lower Snake River and investing to restore the Columbia River system to health. The price tag would be around $33.5 billion.
*~*~*~*
Mushrooms are some of the most fascinating of Earth's denizens. They do the important work of transforming trash into something useful and often beautiful.
*~*~*~*
Designing cities for the benefit of birds would also benefit humans.
*~*~*~*
One of the persistent attempts to degrade environmental protections taken by the previous administration was the gutting of protections from mining for the Sage-grouse. A federal judge has now overturned that attempt, so the habitat of the bird is protected for now, but more is needed.
*~*~*~*
One of the most urgent needs in regard to environmental equity for poor communities is to ensure sources of clean and affordable water.
*~*~*~*
Nepal and Namibia might not seem like they have a lot in common, but they do have this: They are both conservation success stories.
*~*~*~*
Here's a look at the final miles of the Mississippi River, that bisector of our nation, as it makes its way into the Gulf of Mexico.
*~*~*~*
As the environment is degraded and compromised, the quality of human life declines along with it. So when we protect the environment, we are really protecting ourselves.
*~*~*~*
Wolverines are beautifully adapted to survive harsh Arctic winters, but can they adjust fast enough as those winters become warmer due to climate change?
*~*~*~*
New research suggests that allergy seasons are becoming longer because of the changing climate. Not only is the pollen season longer but there is more pollen in the air.
*~*~*~*
Another unfortunate effect of climate change is that the population of Canada Jays in southern Ontario is decreasing because their food sources are being compromised.
*~*~*~*
Moreover, the wild rice that has for generations been such an integral part of the Ojibwe culture is disappearing from the landscape because of the changing climate.
*~*~*~* 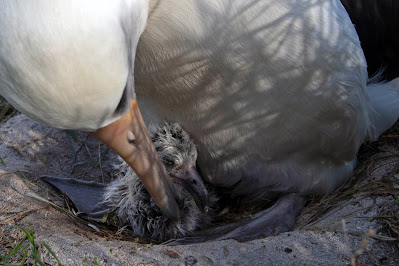 Wisdom has done it again! The world's oldest known banded wild bird, a Laysan Albatross who is at least 70 years old, has hatched her chick on Midway Atoll.
*~*~*~* 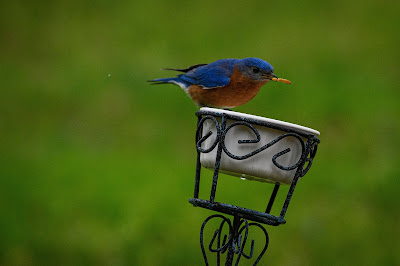 And finally, Margaret Renkl gives us a happiness of bluebirds. This is a picture of one of them visiting her yard.