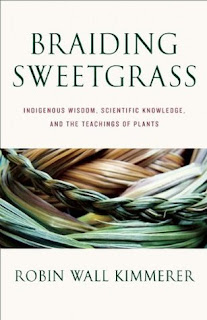 Robin Wall Kimmerer is a trained botanist who, as a member of the Citizen Potawatomi Nation, is also a firm believer in the indigenous wisdom that values the other beings with whom we share this planet, both plant and animal. She particularly embraces the idea that plants with their long history of living on Earth have much to teach us, that they are in fact our oldest and best teachers. The Native American consciousness acknowledges our reciprocal relationship with the rest of the living world and the generosity of Earth in providing everything that we need to live.

"In the indigenous view, humans are viewed as somewhat lesser beings in the democracy of species. We are referred to as the younger brothers of Creation, so like younger brothers we must learn from our elders. Plants were here first and have had a long time to figure things out. They live both above and below the ground and hold the earth in place. Plants know how to make food from light and water. Not only do they feed themselves but they make enough to sustain the lives of all the rest of us. Plants are providers for the rest of the community and exemplify the virtues of generosity, always offering food. What if Western scientists saw plants as their teachers rather than their subjects? What if they told stories with that lens?"

Kimmerer tells stories through that lens. She makes the persuasive argument that her training as a botanist and her beliefs as a Potawatomi citizen are not inimical. The indigenous beliefs about plants and animals are based firmly upon observation and historical experience and so they are rooted in scientific tenets. The recurring theme of her writing is that responsibilities and rights go hand in hand and cannot be considered separately. Moreover, it is important to respect all species for each has its place and its role to play in the environment.

As a student, Kimmerer found that her indigenous consciousness was not always appreciated by her professors. As she discussed her thesis before a panel, when she expressed her thoughts and curiosity about why asters and goldenrod grow together and are so beautiful together, her interviewers saw her as silly. But when she went back to study their complementary growth pattern, she found that the plants attracted more bees when they grew close together. The purple and gold of the flowers were attractive to the pollinators. And so there was actually a scientific basis for the indigenous wisdom.

Likewise, there is a scientific basis for the indigenous wisdom in "Three Sisters" farming. Native Americans had learned to grow corn (maize), beans, and squash (pumpkins) - the three sisters - together. This was the foundation of their agriculture. The corn provided a vertical scaffold for the beans to climb. The beans produced nitrogen in the soil that helped the other plants grow. The large leaves of the pumpkins helped to shade the roots of the other plants from the hot summer sun. And the products of the three plants provided what was needed to nourish the farmers who planted and cared for them. Thus we have a reciprocal relationship.

The book is full of stories and observations like this and it also acknowledges that modern Western life does not indulge in a reciprocal relationship with Nature. Ours is a selfish relationship that takes and takes and does not give and that is the source of many of the problems that face our world, from pollution and inequality of available resources to climate change. It is enough to make one despair. And the author, though essentially optimistic does occasionally give in to despair. After one particularly trying day, she walks near a pond on her property at night.

"'Weep! Weep!' calls a toad from the water's edge. And I do. If grief can be a doorway to love, then let us all weep for the world we are breaking apart so we can love it back to wholeness again."

If only we could.

One more quote from the book sums it all up.

“Action on behalf of life transforms. Because the relationship between self and the world is reciprocal, it is not a question of first getting enlightened or saved and then acting. As we work to heal the earth, the earth heals us.”

Even if we don't necessarily understand it all, we can do what we can, however small it may seem, to "heal the earth" and trust that the earth will heal us.