The Sediments of Time by Meave Leakey with Samira Leakey: A review 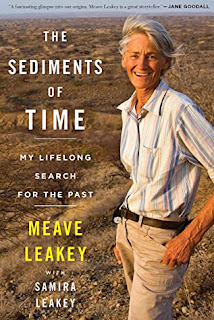 In the late twentieth century, there was an abundance of discoveries of hominin fossils and things related to them. In the 1970s, I was a devoted reader of "National Geographic" magazine and it seemed that almost every month's issue had news of some new discovery, most of them in the Great Rift Valley of Africa. Many of those discoveries were made by members of the Leakey family and their teams of searchers.
The family was led by Louis and Mary Leakey, who themselves had made many of those discoveries. The Leakeys were not only fossil hunters but were also supporters and instigators of much of the research taking place in the area at the time. For example, Louis had been instrumental in starting Jane Goodall in her work with chimpanzees and Dian Fossey with mountain gorillas, work that would consume the two women's lives and, in Fossey's case, cost her her life. In the late 1960s, he also hired a young woman named Meave Epps to head a research project on monkeys.
Meave had been trained as a marine biologist and it was her dream to get a position on a research ship, but she kept being turned down and told that the ships had no facilities for female scientists. And so, when she saw Leakey's ad to head a research facility on monkeys in Kenya, she applied and was hired. It didn't take long, though, for her focus to shift from monkeys to paleoanthropology and hominin fossils.
The impetus for her change in focus was Louis and Mary's son, Richard. Meave fell in love with him when he invited her to join his team and she worked closely with him. As it happened, he was married at the time, but he and his wife later divorced and he and Meave married. From then on, she was fully invested in fossil hunting.
This memoir, which Meave completed with her younger daughter, Samira, has some personal information about her background, her childhood, and education, and the love story with Richard and her life with him, including his several life-threatening illnesses through the years, but the greater part of it deals with the search for fossils and the piecing together of the history of human evolution from the time of the first hominins up through the time of the Neanderthals and Denisovians, and on to modern humans. To anyone, like me, who is interested in this sort of thing, it is fascinating stuff. The writing is very accessible, well-written, and easy to follow, even though it contains a truly mind-boggling wealth of details.
Not all of the fossil discoveries of the period were made by the Leakeys, and Meave gives due recognition to some of the more famous ones, including Lucy perhaps the most famous one of all. This 40% complete skeleton of a female hominin was discovered by American scientist Donald Johanson and his team in Ethiopia in 1974. And in 2007, the fossil was sent on a tour of America, a very controversial decision because of the fragility of the skeleton. Lucy's first stop in America was at the Museum of Natural Science in Houston and my family and I were right there to visit her. Viewing those 3.2 million-year-old bones was almost a religious experience for me. I felt like weeping. I can truly understand how the search for these fossils comes to dominate and define the lives of the fossil hunters.
This is recommended reading for anyone interested in human prehistory and in paleontology or in the exploits of the Leakey family. I certainly enjoyed it.
My rating: 4 of 5 stars
books Meave Leakey reading reviews