The Boy in the Field by Margot Livesey: A review 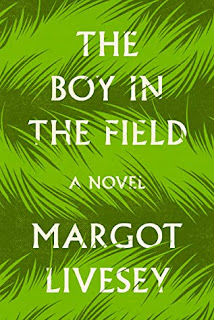 This is one of those rare books that grabbed me from the first page and didn't let go until the last sentence.
The story begins outside Oxford in 1999. Three teenage siblings, two brothers and a sister, had expected their dad to pick them up from school that day, but he didn't come and so they started walking home along a country road. Along the way in a hayfield beside the road, the sister, Zoe, noticed something that looked out of place among the bales of hay, and she went to investigate. She found a boy, a young man really, who looked a bit older than the siblings. Someone had obviously left his body in the field. He was alive but seriously injured and unconscious. It appeared he had been stabbed. While Zoe and Matthew the older brother stayed with the boy, Zoe talking to him and trying to comfort him even though she wasn't sure he could hear her, the younger brother, Duncan, went back to the road to try to flag someone down to get help. (These, of course, were the days before every teenager had a cell phone!) Several cars passed by before a woman stopped and Duncan explained about the boy. She went to call an ambulance which soon came to take him to the hospital. No one thought apparently that they might also need to call the police. When the siblings got home and told their father what had happened, he called the police, bringing detective Hugh Price into the case.
Price is an interesting representation of a detective. So often these mysteries feature detectives who have all sorts of personal problems. They are usually divorced and have problematic relationships with any kids and they generally suffer from a range of addictions, most often alcoholism. Price has none of that. He's a happily married man with a family and no obvious addictions. Quite boring for a detective and quite refreshing.
From this point, the book reads like a mystery as the police investigate what happened. Eventually, the boy, whose name is Karel, wakes up, but his memory of what happened is incomplete and he is unable to tell the police much that is useful. Meanwhile, the kids who found him also are investigating. They go back to the place where they found him to look for clues and they search for the car which may have been involved, trying to fit all the pieces together.
Karel, it turns out, is the younger son of Serbian immigrants. His father comes to the siblings' home to thank them for helping his son. But Karel is more troubled than is at first obvious and he seems depressed and unable to pull out of his funk.
In a subplot to the narrative, Duncan is experiencing his own crisis. He is adopted and now he has decided that he wants to meet his birth mother.  Duncan is very sensitive and visual. He is an artist and he paints what he sees and what affects him. In school, he needs more time than the other kids to complete projects because he processes information differently than most. But he is extremely bright. The siblings have quite close relationships and Zoe and Matthew support the younger brother in his aspirations.
The narrative employs alternating perspective chapters, so we see things through the eyes of Matthew, Zoe, and Duncan in successive chapters throughout the book. I thought Livesey was just brilliant in using this technique. It gave the reader a unique and more complete interpretation of events and the interaction of the three was such a pleasure to experience.
There is quite a lot happening in this book in addition to the progress of Karel's tragic story. Livesey explores family relationships and how people who know each other well sometimes don't really know each other. They are separate people and they see things in separate ways and react separately. And random events can cause their lives to diverge in different directions as they react each in his or her own way. These characters are rendered wonderfully real and complex by the writer and they are people that we can like, relate to, and pull for. I can't think of one thing that I would change about the book.
My rating: 5 of 5 stars
books Margot Livesey reading reviews