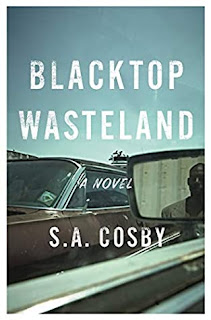 I really am not sure how this book ended up in my reading queue. I must have read a note about it at some point that convinced me it might be something I would enjoy reading. It certainly isn't something that I would normally have picked to read, but I am trying to diversify my reading this year, so maybe that's why I included it. It seems to have been written for men who like fast, loud cars, and who really get off on driving them. It is basically a heist story and the main protagonist is a getaway driver extraordinaire. Nobody can catch him when he's behind the wheel.

That protagonist is a Black man called Beauregard "Bug" Montage. He has a checkered past, but now he's attempting to go straight. He has his own garage. He is a family man who is trying to take care of that family and set a good example for his two children. But he has money troubles and one of his former associates takes advantage of that. He offers him a chance to make one big payday. All he has to do is drive a getaway car once again. The job is a sure-thing jewelry store heist that promises a big payoff for everybody involved. Bug's back is against the wall and he feels he has no choice but to go for it. After all, nothing could possibly go wrong. Until, of course, something does.

Bug has a car that belonged to his father, a man who disappeared from his life when he needed him most, and whose ghost still haunts him as an adult. The car is a Duster. (I looked it up - it's an old model of Plymouth from the '70s.) Bug loves that car more than life itself. It's a juiced-up model that he has tricked out as a drag racer. When he runs in drag races he always wins. No one can touch that car. It would probably be worth $25,000 and his wife begs him to sell it in order to wipe out his debt, but Bug refuses. He'll take the job as a getaway driver instead.

The jewelry store heist turns out to be a bit more complicated than advertised. The jewels actually belong to a really bad guy and he takes offense at having his property stolen. Revenge is on his mind and Bug's family is in the frame as one of his targets. The whole thing gets really tangled and Bug has to agree to do another job to get himself and his family clear. The results could easily have been predicted by anyone who was paying attention.

There are some nice moments in the book. The core of the story is about father-son relationships, race, class, family, and identity. Some of this might have been developed for deeper exploration had this been a different kind of book, but the writer obviously had other goals in mind. His goal seems to have been to write a hard-driving, testosterone saturated gritty crime thriller, and, to some extent, I suppose he succeeded in that. Obviously, I was not the audience he had in mind for his book, but I expect the target audience loved it. And if you are up for such a story, well, here's your book!