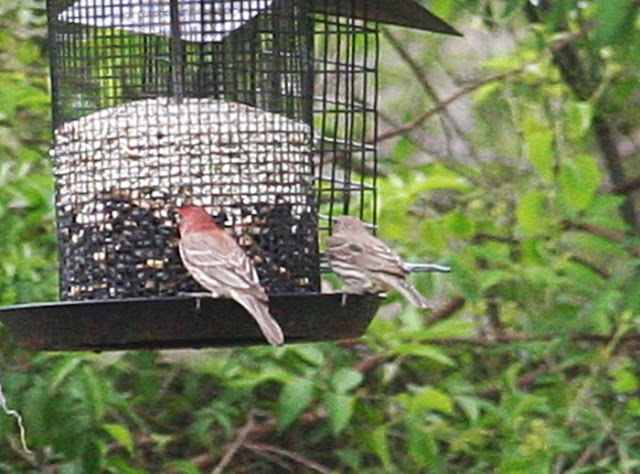 A pair of House Finches share a meal at my feeders. I almost always see these birds in pairs or family groups.
*~*~*~*
2019 was the deadliest year on record for environmental activists around the world. There were 212 murdered worldwide, sometimes by their governments and most often by those who want to exploit the environment. Colombia, with 64 deaths, and the Philippines, with 43, accounted for more than half of the deaths.
*~*~*~*
The Northern California Esselen Tribe has regained at least part of its ancestral lands after 250 years with the purchase of a 1200 acre ranch near Big Sur. The land will be used for educational and cultural purposes.
*~*~*~*
If an animal or plant relocates into a new area because the warming climate has pushed them there, should that species be considered invasive? Scientists are studying that issue.
*~*~*~*
The US exiting from the Paris Accords on climate is bad enough in itself, but it could have a ripple effect, emboldening bad behavior in other countries as well.
*~*~*~*
Can trees be immortal? Well, since we are not, we'll never be able to definitively answer that question, but we do know that many of them can live for thousands of years.
*~*~*~*
Racial injustices in the United States are being exacerbated by climate change as the killer heat that has become common in many areas disproportionately affects people of color.
*~*~*~*
The barbaric method of using glue traps to catch birds is still carried on in France. Now the EU threatens to fine the French unless they stop the practice.
*~*~*~*
Monarch butterflies continue to decline in numbers. The primary reason is that the migrating butterflies are threatened all along their route across the continent.
*~*~*~*
Swifts are birds that live their lives on the wing. They eat and even sleep in the air. Just about the only time that they come down to earth is during the nesting season.
*~*~*~*
The population of the woodland caribou of Canada's boreal forests continues to dwindle. Predation by wolves is often blamed for the decline, but the real reasons are a lot more complicated.
*~*~*~* 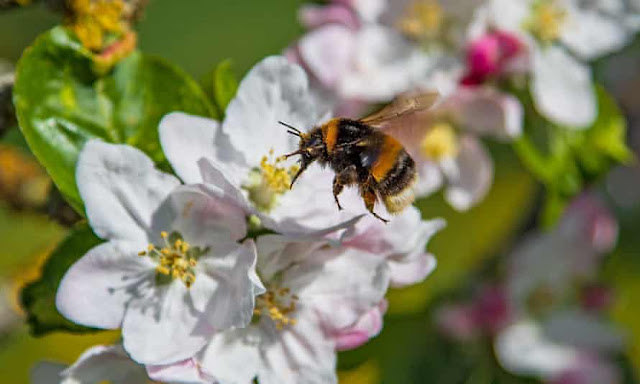 Buff-tailed bumblebee on apple tree blossoms. (Image from The Guardian.)

A shortage of some key food crops is being caused by the loss of bees. Both apple and cherry production has been hampered by the absence of wild bees. The bees face a panoply of hazards from climate change to pesticides and ultimately to loss of habitat.
*~*~*~*
An analysis has found that migratory river fish around the world have plunged in population by 76% since 1970. This catastrophic loss of population was even worse in Europe where populations are down by 93% and for some groups of fish like sturgeon and eel, both of which were down by 90%.
*~*~*~*
An ambitious conservation project aimed at saving the Amazon has been launched by scientists with the support of the United Nations Sustainable Development Solutions Network. The Science Panel for the Amazon consists of 150 experts, including climate, ecological, and social scientists, economists, indigenous leaders, and political strategists mostly from Amazonian countries.
*~*~*~* 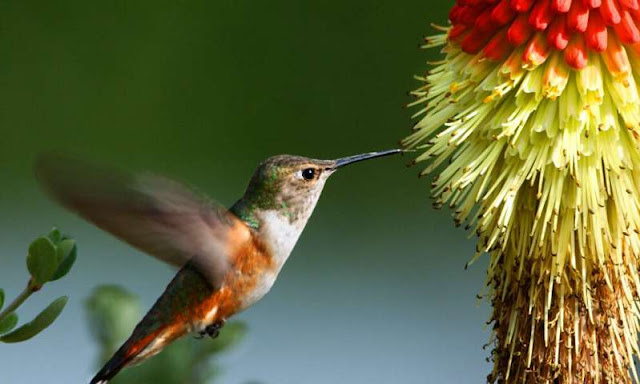 The beautiful little Rufous Hummingbird makes a long migration flight twice each year, but a study has found that the timing and route patterns of that migration vary according to the sex and age of the birds.
*~*~*~*
Light pollution from artificial lighting disrupts the sleep patterns of birds and that, in turn, disrupts their foraging abilities, as well as their abilities to avoid predators and to find a mate.
*~*~*~*
The only known wolf pack in the state of California has some new members. A new litter of pups has been produced bringing the total number of animals in the pack to 14.
weekly roundup