Death in Her Hands by Ottessa Moshfegh: A review 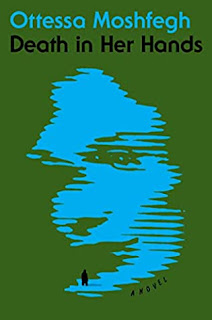 Her name was Magda. No one will ever know who killed her. It wasn't me. Here is her dead body.

Thus begins the new novel by Ottessa Moshfegh, she of the mordant prose and biting sense of humor. I loved her last book, My Year of Rest and Relaxation, and had eagerly awaited this new one.  I learned that, in fact, Death in Her Hands was not new. She had written it earlier in her career and put it away. I'm not sure why. I'm just glad it is finally here.

Those words that begin the novel were written on a note that was left on a trail through some birch woods where recently widowed Vesta Gul, age 72, walks her dog, Charlie. The note is weighed down by some black rocks. Vesta finds the note, picks it up, and so begins her adventure as a murder mystery investigator. She determines to find out who Magda was, where her body is, and who killed her.

But there is no body, so what's an investigator to do? Vesta is an avid reader of Agatha Christie novels and she takes her cues from them. From her secluded cabin on a lake and with little experience in her sheltered life to guide her, she begins to imagine who Magda was, what she might have looked like, who her associates were, and how she might have come to her sticky end. What she doesn't do is notify the police about the note or discuss it with anyone else.

But then who would she have discussed it with? She has no friends and only minimal contact with her neighbors, none of whom live close to her. Vesta had moved to the cabin from across the country, after the death of her husband, Walter, and she's made no effort to become a part of the community.

Walter was a scientist and an academician and Vesta tells us in her first ruminations about him that he was a loving husband. But as the story develops and we gradually learn more about him, we find that he was actually a womanizer who preyed on his young female assistants and who belittled and psychologically tormented Vesta. He was a German with suspected Nazi leanings, and at one point as Vesta laments her misspent life, she cries that she wishes she had never met that "awful, deleterious, pompous man" who she describes as her captor.

Perhaps because her life has been so circumscribed, Vesta's imagination is vibrant. She experiences life through her imagination. Her only regular interaction is with her dog and her ventures out to buy food or go to the library. She has no phone, no computer, and so she goes to the library not only for books but to use their computers to find out about Magda and how to investigate her "murder." She visits a web page called "Top Tips for Mystery Writers" and fills out a questionnaire that is intended to help writers develop their characters.

When she actually encounters real, live human beings, Vesta's reaction to them reveals her utter snobbishness. She feels revulsion at overweight mothers who she sees shopping. She describes them as "dull heifers" and wonders if they are even able to reason. They appear idiotic to her, like cattle, half asleep and chewing their cuds while awaiting their slaughter.

In imagining Magda, we begin to suspect that Vesta may actually be composing a narrative of her own life. Magda becomes a dark presence who was a bully who routinely performed everyday vile cruelties and maybe deserved her death. Vesta begins to be consumed by that dark presence, imagining someone watching her from the woods or that someone has been in her house during her absence. Has Vesta lost her mooring to reality altogether?

This book would obviously not appeal to everyone. There are readers who require constant action in the narrative to retain their attention. (I live with one of them.) The action in this novel occurs in Vesta's mind and that would just be too tedious for those readers. Vesta's vivid interior life contrasts with the pallid person which others experience, as the constant frenetic activity of her mind is the antithesis of her dull routine inactivity.

I loved this book while I read it. I was fully invested in the colorful landscape of Vesta's mind. I love it even more now that a week has passed since I finished it. It has grown in my own mind as I contemplate its structure and the writer's vision. That's the kind of impact that a really talented writer can have and damn, Ottessa Moshfegh can write!