The Wife by Alafair Burke: A review 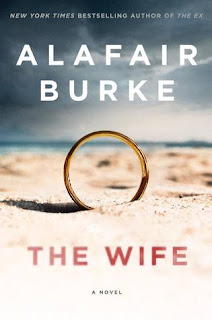 I didn't much like any of the characters in this book with the possible exception of the kid Spencer, and that at first made it hard for me to get "into" the story. But at some point along the way, the plot grabbed me and I was all in for the rest of the ride through all of its twists and turns.

The unreliable narrator has become so prevalent, especially in the psychological thriller genre, that it is almost a cliche. Alafair Burke uses the technique quite skillfully in this novel. It is impossible to tell at first whether we are being lied to or not. Is this person trustworthy? Can we rely on what she is telling us? In fact, can we rely on any of these characters? Are they all hiding secrets that they will say anything to keep hidden?

Burke is certainly a talented storyteller and once she had hooked me, I loved following her character-driven plot right up until that final twist at the end. I never really saw it coming.

Angela and Jason Powell have been married for six years and live in Manhattan when we meet them. Jason is a popular economics professor at NYU. He is also a bestselling author and has a growing media and consulting career, all of which have been parlayed into considerable wealth. The Powells live a comfortable and charmed life. Angela is a stay-at-home mom to Spencer. The only seeming blemish on the perfect picture has been the attempt to have a child of their own. Angela suffered three miscarriages in the attempts.

Spencer had been born before their marriage and is part of the deep, dark secret of Angela's past that she assiduously hides.

Angela was a bit of a wild child as a teenager and when she was sixteen and walking along a dark road at night after a party, she was kidnapped. She was held and brutalized and raped for three years by her captor. For the last couple of years, another girl was held along with her. Finally, neighbors got suspicious and contacted the police, but the kidnapper escaped with his victims, including a baby who had been born during their ordeal. When the cops caught up to them, the kidnapper was shot and killed, but not before he had shot and killed the second girl.

Angela's parents took her and the baby home and hid the fact of her kidnapping from neighbors. Their story was that she had simply run away from home and now she had returned.

Angela eventually found work with a caterer and it was at one of the parties that they served that she met Jason. A couple of years later they were married and living that charmed life in New York. Then it all fell apart.

An intern at NYU accused Jason of sexual harassment. When that news became public, another woman named Kelly Lynch, a consulting client of his, accused him of raping her. While all of this was being litigated,  Kelly disappeared. When her dead body was found, Jason was arrested for her murder.

Burke skillfully builds the tension and she does play fair in that there are clues throughout the narrative, but they were well camouflaged and I was only able to see them in retrospect as I neared the end and things became more explicit. This book confirmed me as a Burke convert. I'll be looking for more of her work.