Through a Glass, Darkly by Donna Leon: A review 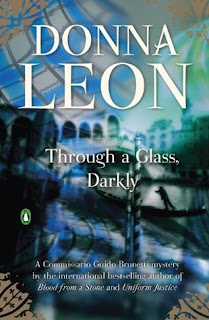 Time for a trip to Venice to see what's happening with Commissario Guido Brunetti. It is spring in Venice and Guido is enjoying the early greening of the vegetation and the soft, sunny days of the season. He takes every opportunity he can to escape from his office at the Questura and bask in the sensual vernal pleasures.

But, of course, as always happens, work has a way of interfering with Guido's pleasure.

In this instance, it starts with his assistant Vianello asking him to intervene in a case in which a friend of his who is an environmental activist has been arrested during a protest. It turns out there really is no case against the man, Ribetti, and he is released. But as they are leaving the police station they encounter the man's father-in-law, Giovanni De Cal, who is the owner of a glass factory in Murano. De Cal despises his son-in-law and is furious with him for being arrested. He takes Ribetti's environmental activism as a personal affront. He accosts his son-in-law and threatens him, as he has been known to do before.

It's not clear whether De Cal is a man who would actually act on his threats of violence, but soon after, his night watchman is found dead under suspicious circumstances next to one of the factory furnaces. The night watchman had believed that harmful chemicals in the soil and water had been responsible for the disability of his little daughter and he had been investigating the soil and water around the glass factories to try to prove his theory. Had De Cal or the other owners considered him a threat that they had to get rid of?

We know from experience that any case that Brunetti investigates is going to uncover a morass of corruption, both public and private, and that happens once again here. It turns out that some of the Murano glass factories, including De Cal's, have been evading regulations that were put in place to ensure that they were not poisoning the soil and water and inspectors had not discovered the infractions. It was left to people like the night watchman to ferret out the information and make it known. But the challenge for Brunetti is to prove that the man was murdered instead of dying by accident, or, failing that, to at least hold the factories accountable for their pollution and the danger they pose to public health.  It's a tall order especially when the owners of the factories have powerful political allies, but Brunetti and Vianello are seasoned warriors in the battle with Italian bureaucracy.

I found the plot of this entry in the Commissario Brunetti series to be particularly interesting and well-done, and I learned quite a bit about the ancient art of glass-making in the process of reading it. The characters, as usual, are well-drawn.  Donna Leon has done a good job of keeping this long-running series fresh and entertaining.  On the whole, I count this as one of the better reads in this series.