February 14, 2020
A roundup of the week's news of birds and the environment: 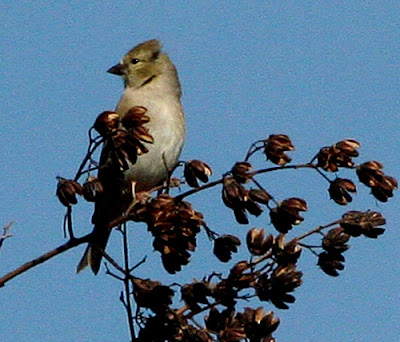 A windblown American Goldfinch visits a crape myrtle still bearing its seeds. Goldfinches and other members of the finch family love these seeds and spend a lot of time in winter munching on them and later spreading the seeds around the yard. In recent winters, our backyards have been alive with goldfinches and sometimes their cousins, Pine Siskins. Not so much this year. I have only seen very small flocks of the birds in my yard. The same goes for Cedar Waxwings. Instead of flocks in the hundreds that we've had in past years, there are flocks in the tens this year. Is the warming climate encouraging them to stay farther north in winter?

This is the weekend of the Great Backyard Bird Count when birders report the location, species, and numbers of the birds that they observe. It's a way for citizen scientists to participate in helping scientists to track where the birds are in mid-winter. It's fun and free and here's how you can participate.

The National Oceanic and Atmospheric Administration officially announced that January 2020 was the hottest January on record with a global temperature averaging 2.5 degrees Fahrenheit warmer than the 20th-century average. NOAA's records go back for 141 years.

And in Antarctica where the record for one day's hottest temperature (65 degrees F) was set just last week, that record has now been broken with a temperature of 69.3 degrees F on February 9.

A hotter Antarctica is bad news for many of the penguins that live there, including the continent's most numerous species, Chinstraps. Scientists say that Chinstrap Penguins nesting on Elephant Island number less than half as many birds as were there fifty years ago. They believe that climate change is a big factor in the decline. 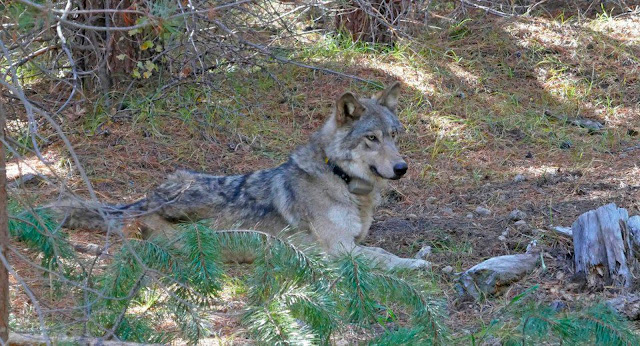 Wolf OR-54 image by U.S. Fish and Wildlife Service.

Sad news regarding the female gray wolf originally from Oregon that had traversed some 8,700 miles in northern California and Oregon in the last two years looking for a mate. Conservationists searching for her after her tracking device went silent have located her carcass. The circumstances of her death are being investigated.

And even more sad news about an endangered species: Four mountain gorillas have been killed, apparently by a lightning strike, in Mgahinga National Park in southwest Uganda, according to conservationists.

Elsewhere in Africa, the bad news is locusts. Unseasonable rain linked to a climate-change-driven event in the Indian Ocean has created perfect conditions for the swarms of locusts and they are invading Ethiopia and Kenya by the billions.

A new study by University of Miami researchers confirms that the toxic reach of the 2010 Deepwater Horizon oil spill in the Gulf of Mexico extended much farther than has previously been acknowledged. I don't think that will be a surprise to anyone who lives near the Gulf Coast. 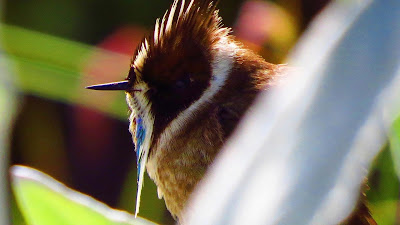 This is an image of a hummingbird called the Blue-bearded Helmetcrest. The population of the species is vanishingly small. It lives in the northernmost mountain range in Colombia, which it shares with the indigenous Kogi tribe that has called the area home for centuries. Both the people and the bird are imperiled.

Some of the world's most endangered mammals live on the island of Madagascar. They are lemurs and the main danger to their continued survival is loss of habitat. One species in particular, the ruffed lemur, seems to be especially affected by human activities that are degrading the habitat.

Big discoveries by the fossil hunters: (1) A tyrannosaur that is older than T. Rex and other famous members of the family was found in Canada. The bones were actually found some time ago and sat in a drawer in a museum until they were recognized for what they are. The bones are 79.5 million years old. (2) And then there is the recent find of the fossils of car-sized turtles that once roamed in what is now Venezuela and Colombia.

A Yemeni birder and wildlife photographer who had lived in New York for twenty-two years and had faithfully reported to yearly check-ins with immigration officials was summarily deported on January 28 without allowing him to contact his family or his lawyer. He went to the scheduled check-in and was not allowed to return home or to contact anyone.

Grizzly bear deaths have increased dramatically in the millions of acres in and around Glacier National Park. Trains, cars, and poaching have all contributed to the fatalities raising concerns about the future of the grizzly population in the area.

In addition to all the other devastation caused by Hurricane Dorian to the Bahamas, a significant amount of damage was done to the coral reefs in the area.

Voters are saying that climate change is one of their major issues this year. The Climate Leadership Council hopes to use that expressed concern to prod politicians to institute a carbon tax. Carbon dioxide emissions comprise most of the greenhouse gases that are warming the Earth and these economists, politicians, and corporate executives believe they can get agreement from all sides to address the problem in this way. To which I can only say, good luck with that.