February 07, 2020
A roundup of the week's news of birds and the environment: 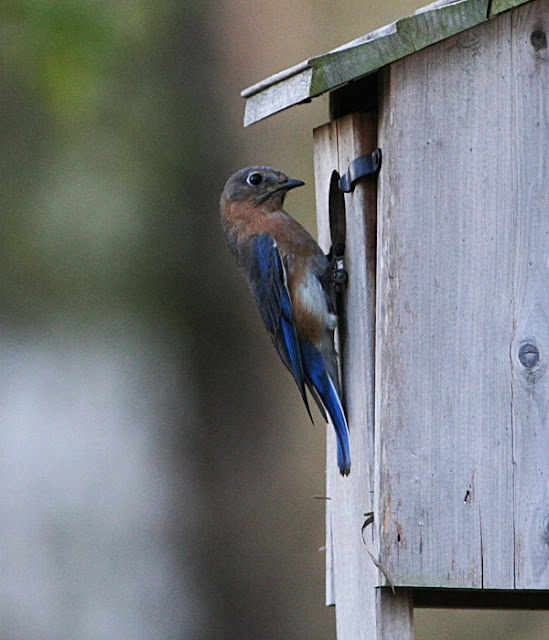 It's bluebird season. This female Eastern Bluebird is checking out a potential nesting site. Pairs are already nesting or they are searching for a place to raise their chicks. They and the Carolina Wrens and Carolina Chickadees like to get an early start on nesting. Early birds get more caterpillars to feed their families.

Coming off the warmest January on record, Antarctica is now breaking heat records as well. On Thursday a temperature of 65 degrees Fahrenheit was recorded, making it the hottest day on record for the continent.

More sad news from the Monarch butterfly sanctuary in Mexico: A second activist has been found dead there. He had disappeared on January 27 and his body was found on top of a hill this week. He was covered in bruises and had a serious wound to his head. The illegal loggers in the area are suspected of being implicated in this death as well as the earlier one.

The current administration has finalized plans to allow mining and energy drilling on nearly a million acres of land in southern Utah that had been protected as part of a major national monument. However, there does not appear to be much interest from energy companies in drilling or mining in the area.

New research has shown that the backyard feeding of Eastern Bluebirds can have a major impact on reducing the parasitic nest flies that feed on their nestlings.

A maker of the pesticide chlorpyrifos which has been linked to brain damage in children has announced that it will stop producing it by the end of the year. 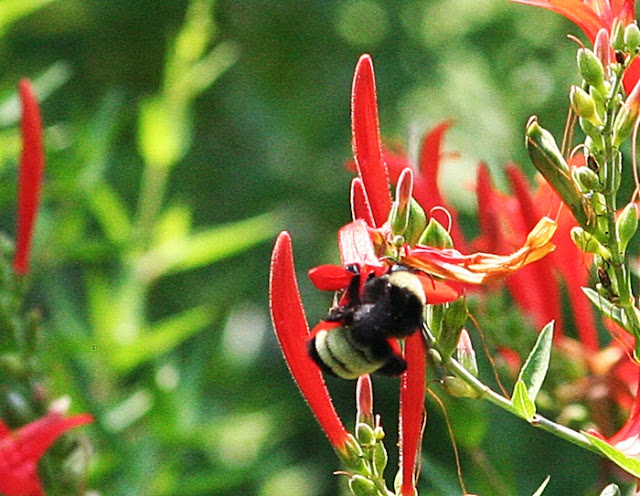 Bumblebee on anisacanthus blossoms in my backyard.

Bumblebees just cannot catch a break. Already beset by the use of pesticides in the ecosystem and the loss of habitat, it seems that they are especially vulnerable as well to the effects of climate change. Hot temperatures are contributing to their decline.

Andean Condors are being illegally poisoned by livestock owners who incorrectly believe that the big birds are a threat to their living animals. Condors do not attack living animals; they are scavengers that feed on dead carcasses.

It's not only birds that are disoriented by bright lights at night. Fireflies are having a problem finding mates in areas that are lighted at night. The insects find their mates by responding to the potential mate's flashing light. The artificial lights interfere with that communication.

Europe has experienced a forest revival. Approximately 40 percent of the European Union's landmass is covered by trees. That's a good thing, except for the fact that it makes the continent more vulnerable to forest fires, especially in a climate that is heating up.

Overharvesting and habitat loss are contributing to the disappearance of many of the world's freshwater megafauna species.

In the Dominican Republic, an experiment involving playback of seed-eating birds' songs has shown that using such playbacks can bring the birds into an area and help with the dispersing of seeds and replanting of that area.

The platypus has certainly earned its title as the world's strangest mammal. It may also become one of the world's scarcest as it struggles against habitat loss, predation by feral cats, and now climate change and wildfires.

Chemicals released into Florida's Everglades by hurricanes, fires, and other disruptions can linger in the delicate ecosystem for years.

Lonesome George was the name given to what was thought to be the lone specimen of a particular Galapagos tortoise. George died in 2012 and the species was thought to be extinct. But recently scientists have discovered about 30 of the giant tortoises that are at least partially descended from presumed extinct species, including that of George's.

Butterfly wings must have suitable temperatures in order to function properly. Recent research shows that the insects are able to regulate their wing temperatures through both structural and behavioral adaptations.

Peru has pledged to create a giant new marine reserve of 19,300-square-miles around a range of 93 submarine mountains that are home to some 1,100 species.
weekly roundup